The trip on the Manly Fast Ferry takes 20 minutes, compared to half-an-hour on the old ferries, so very soon the city sky-line was in view. 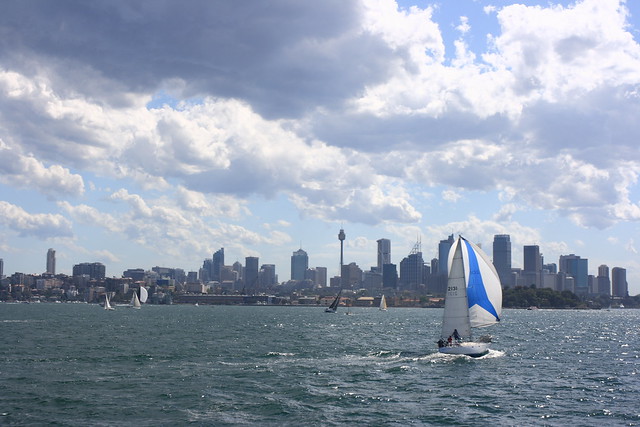 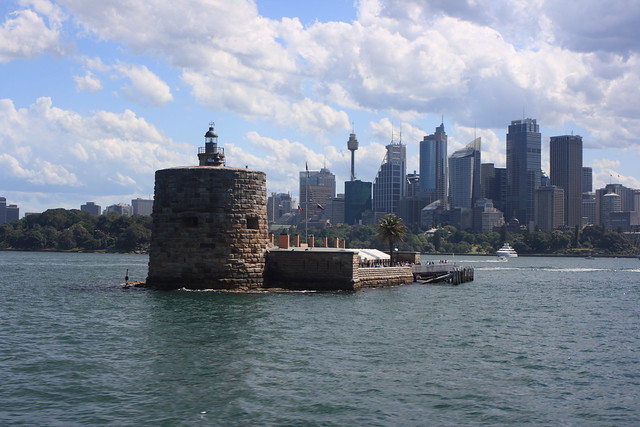 Beyond the island are the Royal Botanical Gardens and the Opera House – always a reassuring sight. We pass by two old ferries which service the smaller wharves on the Harbour. 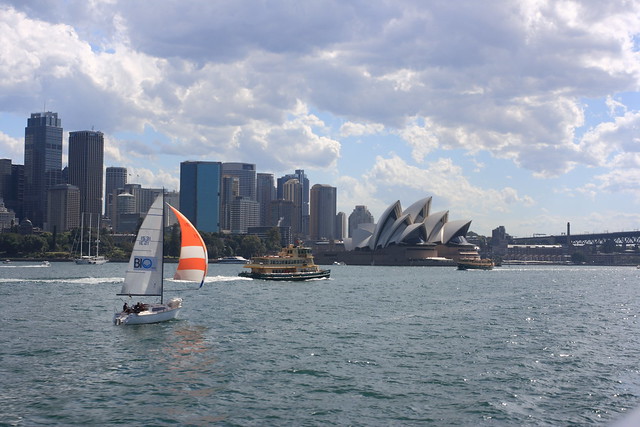 A cruise past the Opera House, and we’re once again into Circular Quay. Not a bad commute. 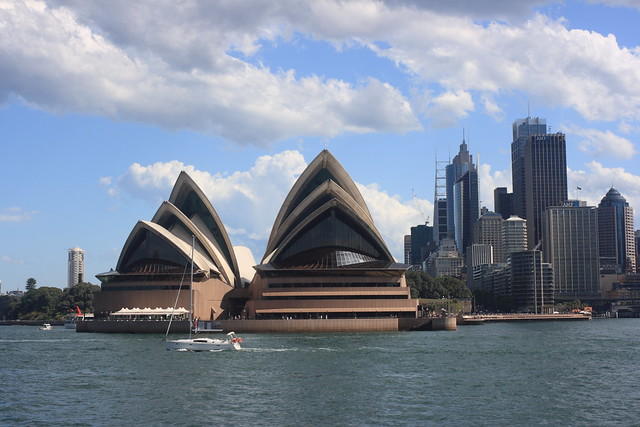 Last November, on Remembrance Day, our family gathered at Circular Quay on a breezy evening. 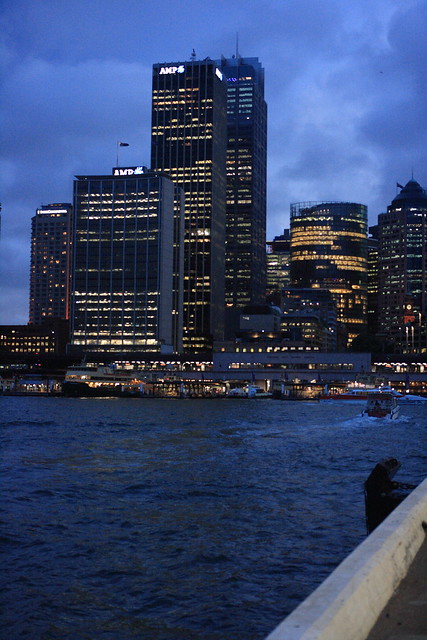 Not to take in the view, which was of course splendid… 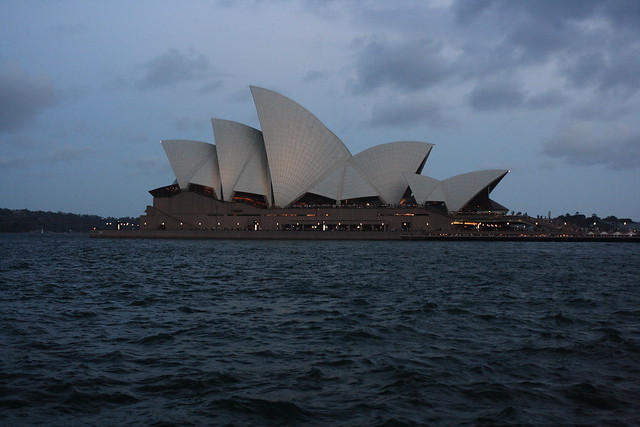 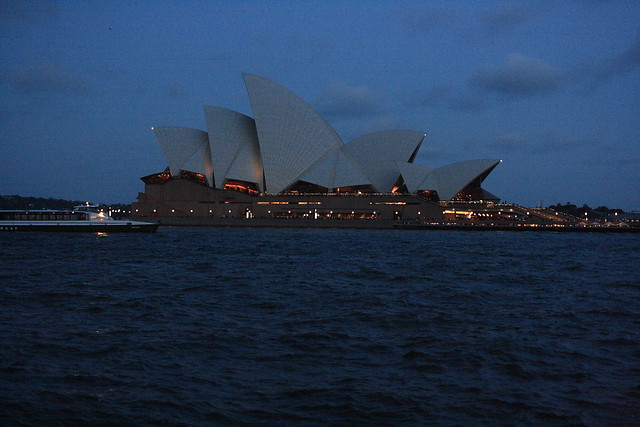 But to see a banner of red poppies unfurl over the sails of the Opera House. 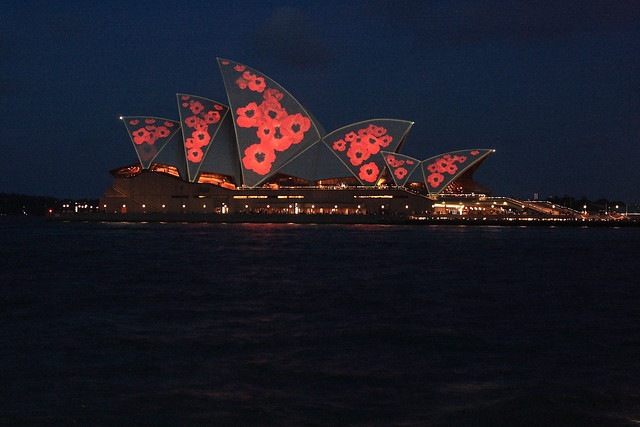 This was the work of my father-in-law, P, a former member of the Royal Navy and local RSL member. 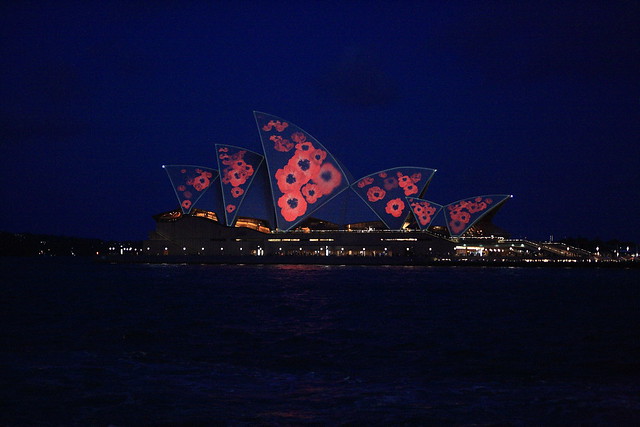 He wanted to raise awareness of Remembrance Day, and the cause of current and past military personnel from all conflicts outside of Anzac Day. 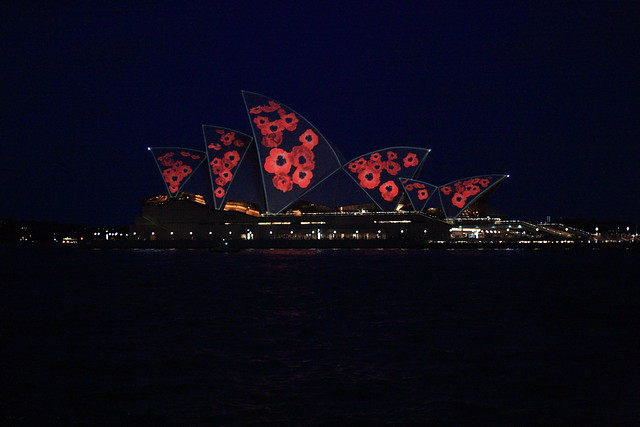 Given that our more recent veterans come back with all sorts of physical and mental stresses and frequently face a lack of support, it’s a worthwhile cause to champion.

At the beginning of May we saw the Icelandic folk/pop/alt band Of Monsters and Men in the Concert Hall of the Sydney Opera House. The Opera House opens its doors to contemporary artists pretty often as I’ve seen a few bands there over the years. We were seated in the stalls for the first time, which gave us a real close up view. 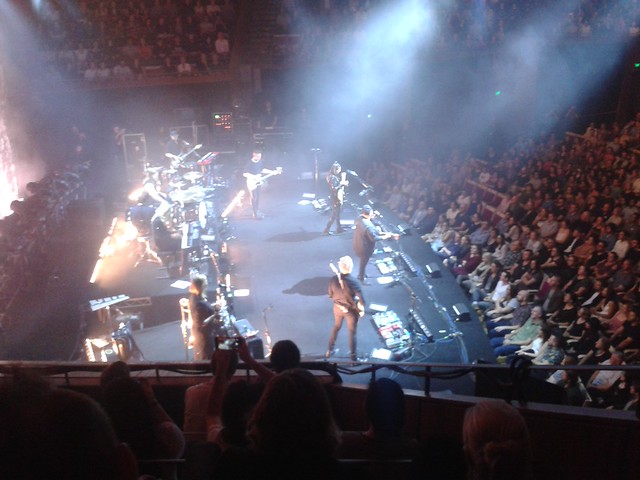 Listening to their albums, I’m aware that the band is a large one, having two lead singers, but I wasn’t quite prepared for 9 to 12 people on the stage!

The audience was a real mix, from under 20’s to over 60’s – a real surprise given that the group is only 5 years old and doesn’t get a lot of mainstream radio play. I guess these days people can discover new music in all sorts of ways. 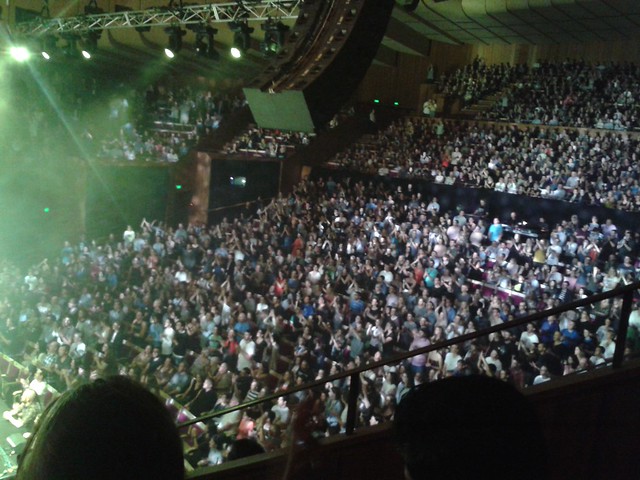 They played the content of their two albums, and a few odds and ends, and their music sounded grander on stage than on their album. To me, they are one of those bands that sound better live than on their recordings. It even brought the crowd to their feet every now and then! 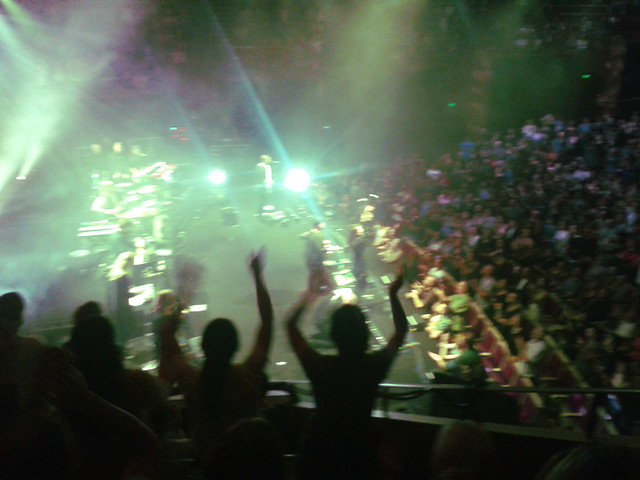 And yes, the smoke machine and strobe lighting was in use. Not surprising given the atmospheric nature of much of their songs. 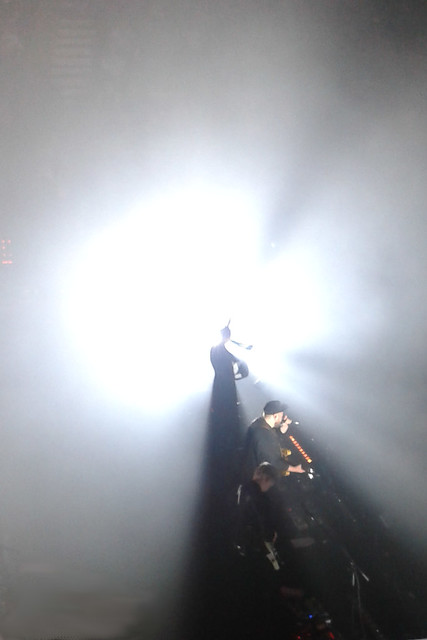 All in all, a good night out.

You couldn’t forget that you’re surrounded by water at Bennelong Point, but after dark, water became mysterious, even forebidding. 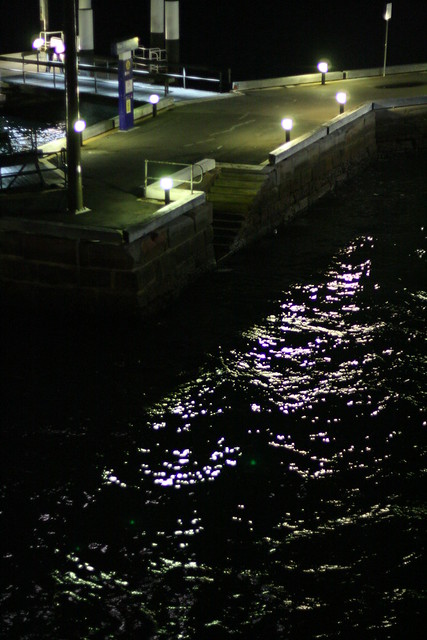 Whereas during the day the exterior of the Opera House dominates, at night the interior came into its own. With so much detail, it was no wonder that the building took at age to finish. 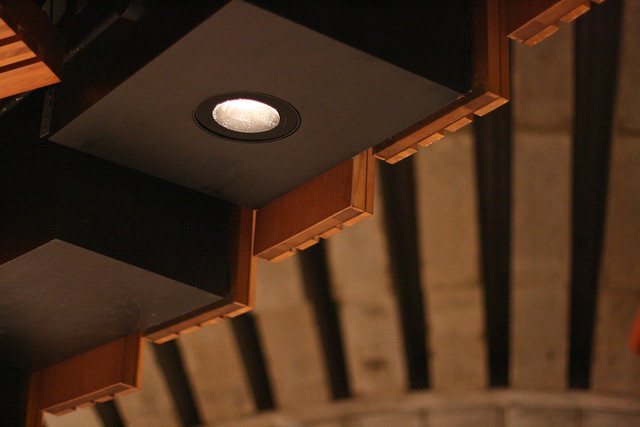 It wasn’t just the wood and concrete that was fascinating, there were also masses of steel and glass. It gave a new perspective on the Bridge. 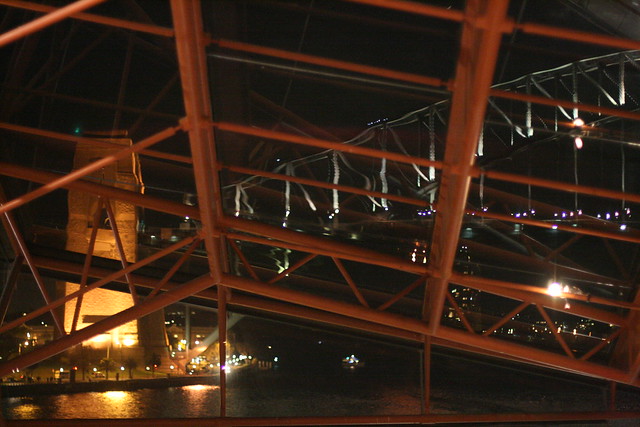 It was a lovely hour to be at Bennelong Point. We waited on the steps while the light slipped away, and we weren’t the only ones. 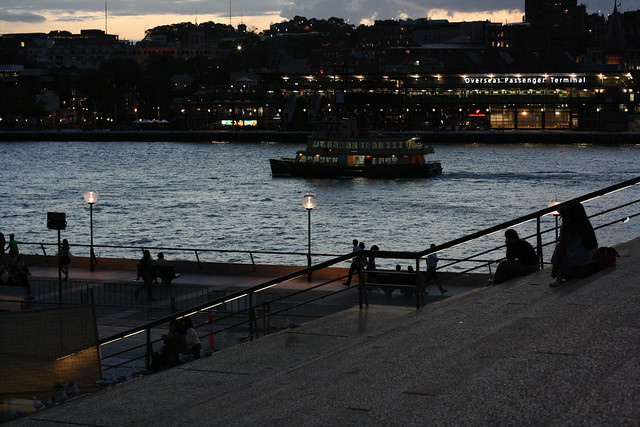 I liked how they had lit this tree in the Botanical Gardens. It helped us ignore all the construction in front of it. 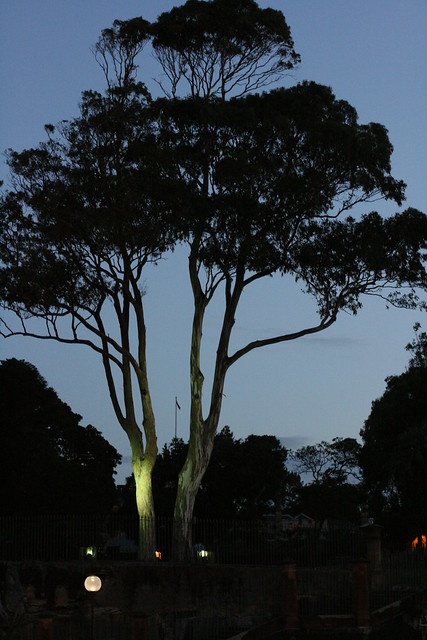 Eventually it got so dark that the people around us were just silhouettes in the night. 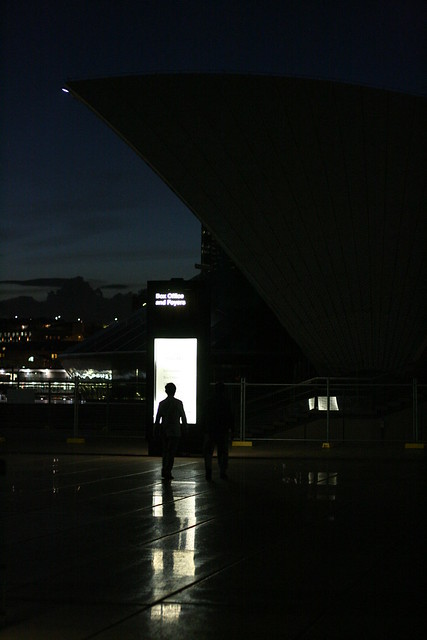 We were at the Opera House to watch Neil Finn play, but while we were waiting for the 9pm start it was a perfect time to take some photos of the dusk.

Bennelong Point was certainly a popular place to be on a Friday night. 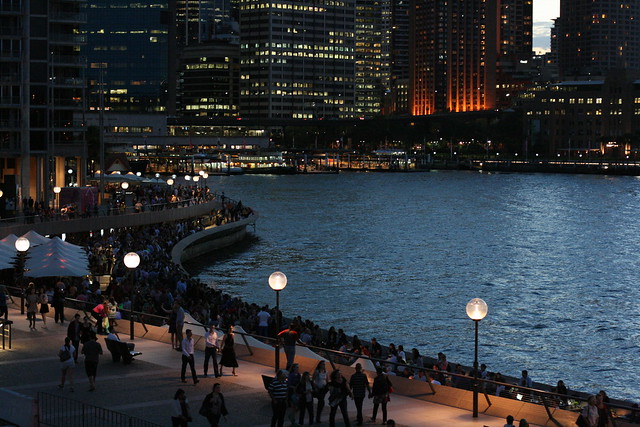 There was a lot of construction work going on the foreshore. They’re fixing up the car park apparently. 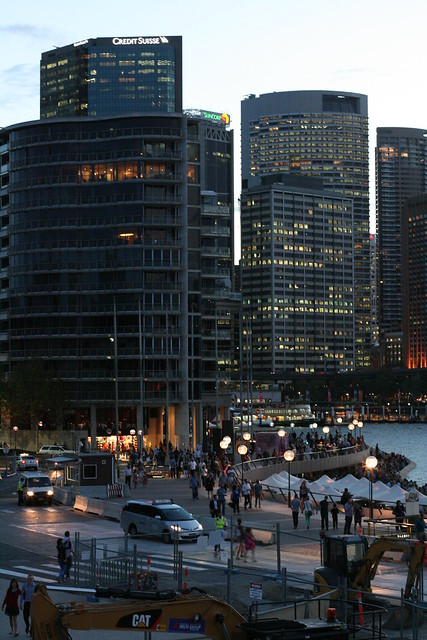 Of course, the Bridge was its wonderful luminous self. 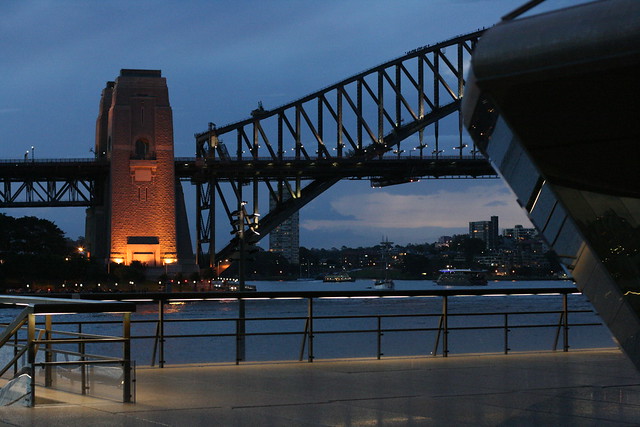 Saw another wonderful show at the Opera House last night. This time it’s a collaboration between Sydney band, The Whitlams, and the Sydney Symphony Orchestra. The last time I saw an SSO collaboration of this kind was a few years back with Ben Folds, but The Whitlams show was a different beast all together.

For one, we had their four-piece band on stage, hence the arrangements were more of a collaboration between the band and the orchestra, meaning that for the most part, the existing arrangements of their songs remained in tact. With Ben Folds, the orchestra was the backing band, meaning that the arrangement can be completely different to the original songs themselves. Doesn’t mean that the show was any worse, just different.

I liked that they played the album Eternal Nightcap in its entirety. I owned this album while I was at uni. It was played often, so the songs were familiar, even if I hadn’t heard them for a number of years (I gave the album away eventually). The songs Buy Now and Pay Later and Charlie No. 3 were highlights, but after the interval there was a magical arrangement for a song I’m not familiar with, called Out the Back, which tells about a surfing moment. The middle string movement was so sensual – I could see the waves lapping the shore, literally hear the seagulls calling, and almost taste the salt. It was magic, and shows how evocative an orchestra can be, if utilised in an imaginative way.

Well, here’s a taste of what I saw last night, a rendition of No Aphrodisiac.

I’m not a fan of amusement parks, but Luna Park, and Sydney Harbour in general, certainly looked pretty at night.

We didn’t exactly see The Mikado but saw a few things lying around backstage:

Lots of lighting rigs lying around.

And a mixer that I want to get my hands on.

But the coolest thing is the hydrolics that things from below to the stage.