We explored the paddock beyond the pony yard. There’s plenty of cattle poo but no cattle. 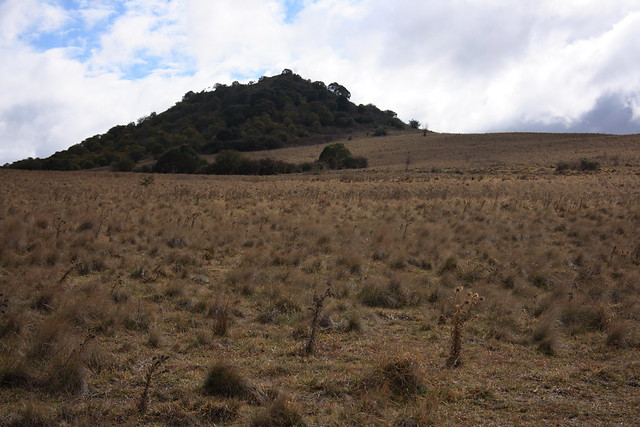 The hillock here has been described as an extinct volcano or a volcano plug, but Hubby thinks it’s lava flow that met a bit of an obsticle. Over time it’s hardened into basalt. There’s certainly evidence of a lot of prehistoric volcanic activity all over the New England area. The gold and gems found in the rivers are evidence of that.

Bridie however was more interested in smells – rabbits and roos in particular. 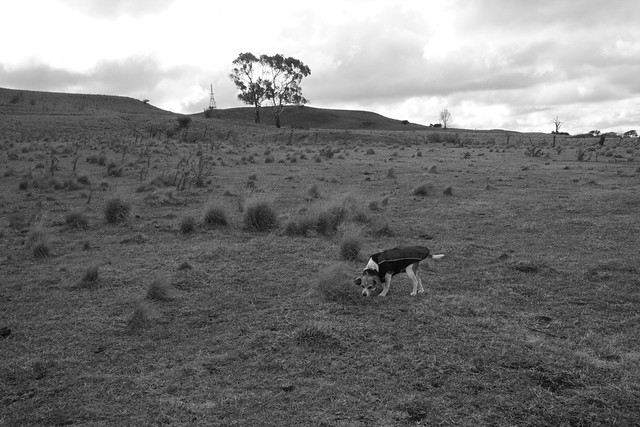 She certainly needed her coat as it was frigid on the mornings we were there. 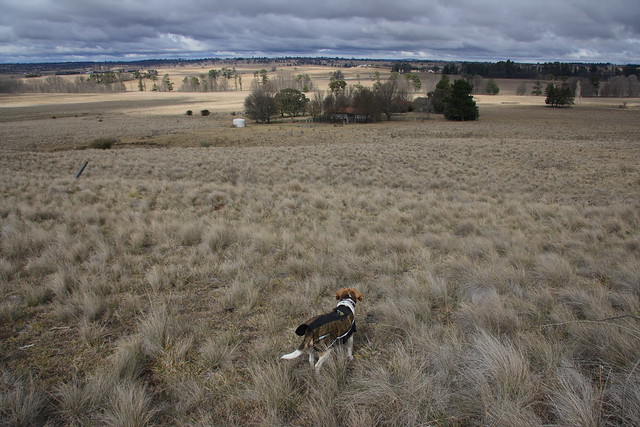 From the farm, the undulating landscape seemed to go on forever. Even though the wind was icy cold and the sky overcast, I loved the way the muted light played on the hills. It’s almost European. 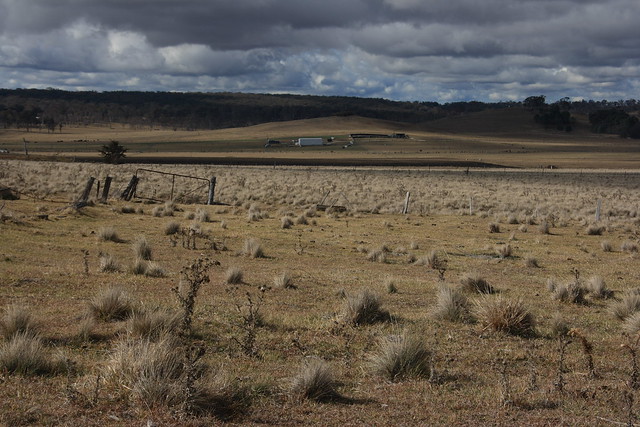 On the property, there was an assortment of outbuildings, some like this barn, very rustic indeed. 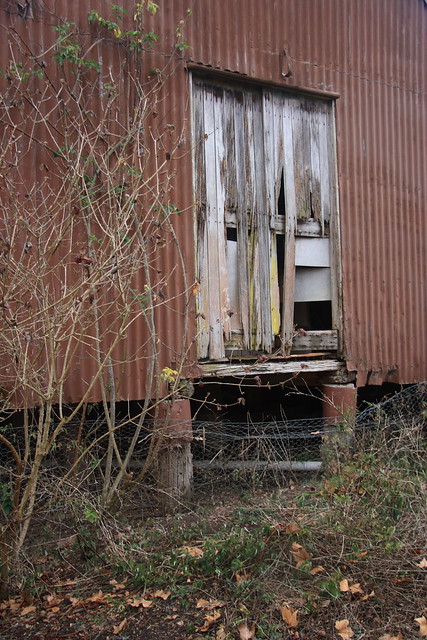 The entire farmstead was fenced – to stop the dogs and poultry wandering off and the cattle wandering in! 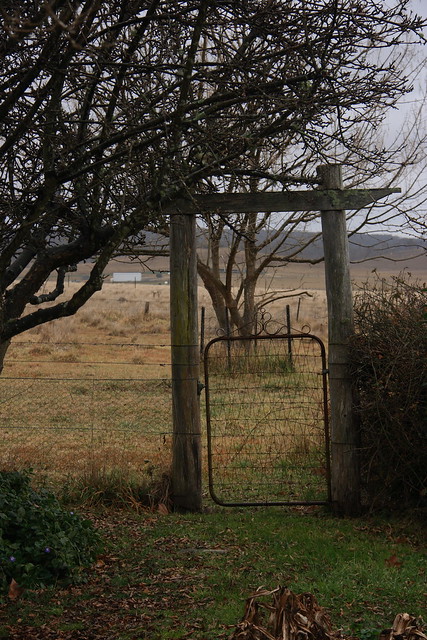 The trees were winter-bare, and the air was certainly more crisp than that down the coast. Lucky we brought a lot of winter woollies. We certainly needed it. 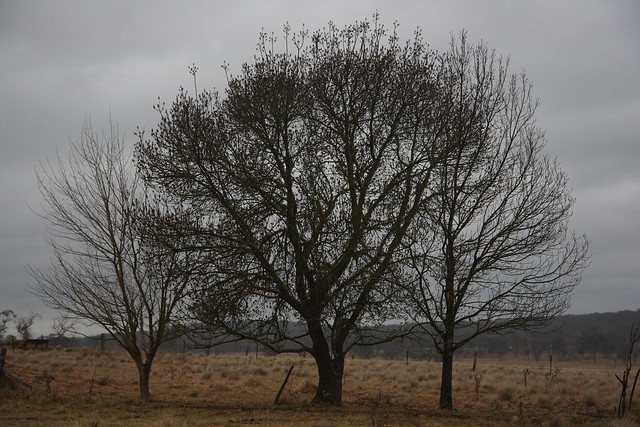 We spent the next few days in the Northern Tablelands town of Armidale. It’s a big town, but its historic buildings gave it character, and the student population from the University of New England gave it life.

We stayed a bit out of town at Poppy’s Cottage B&B. It’s set on a small farm with an old farmhouse with a separate cottage for guests. Hosts Poppy and Jack were very welcoming, providing great breakfasts and even more sumptuous dinners. 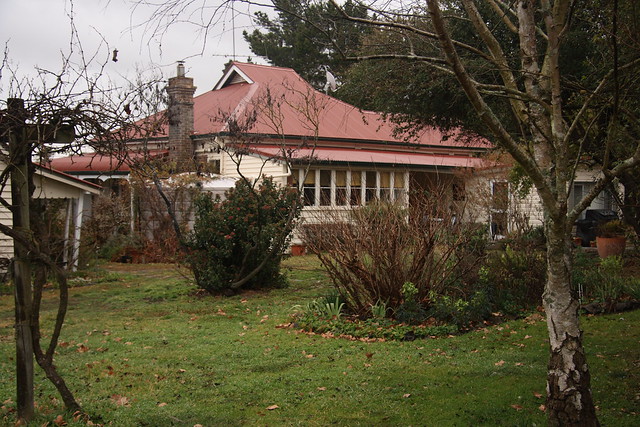 Being a farm, they had an obligatory dog or two. 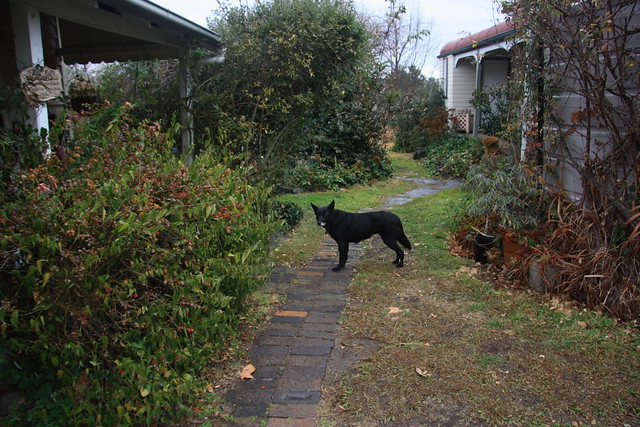 Lots of gardens, as well as a pet Shetland pony in the paddock. 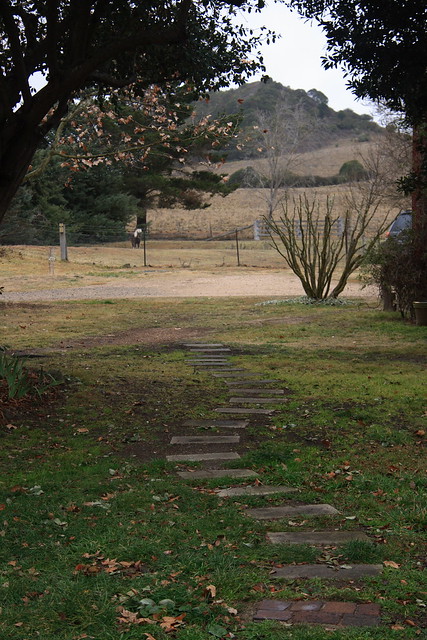 We’ll have a good ramble around the property in the next post.

We’ve just returned from our road trip north, and over the next few weeks I’ll be posting about it. We decided early on that we wanted to take our beagle Bridie with us, and so I did quite a bit of research on dog-friendly accommodation along the New England and Pacific Highways.

After an overnight stop in Singleton, we made our way north along the New England Highway, diverting for lunch at village of Nundle. It’s a sleepy village that was previously a gold mining town. You can still fossick for gold and gems in its river, but being mid-winter it was way too cold for that. Instead, we visited the Nundle Woollen Mill, a working wool mill. 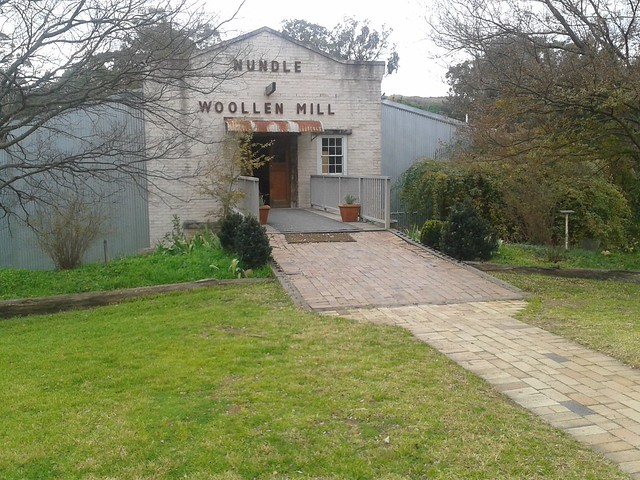 It had a good range of yarns and wool wear, as well as working pieces of wool making machinery. 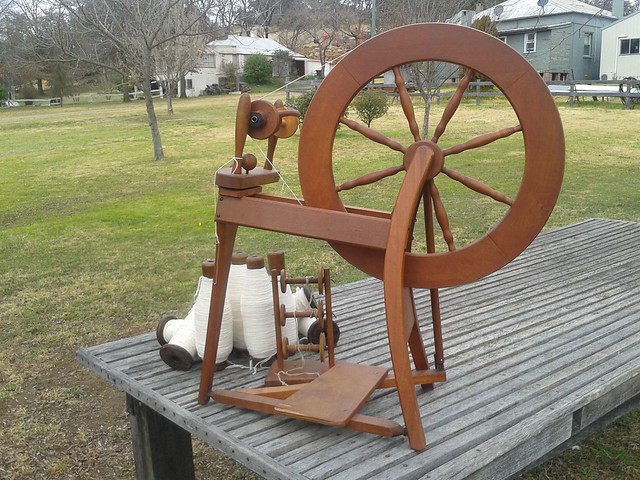 I didn’t buy any yarn then, but I’m thinking about it.

After a visit to the Australian Centre for Photography gallery, Hubby and I stopped for dinner at Lucky Tsotsi, a bar and restaurant specialising in food from Southern Africa. I’d never travelled there before, but Hubby had lived in South Africa for 18 months and wanted to relive his food experiences.

Hubby had Mozambique Chicken, hot and spicy with Peri-Peri sauce that was a fusion of flavours from the Portuguese colonies. 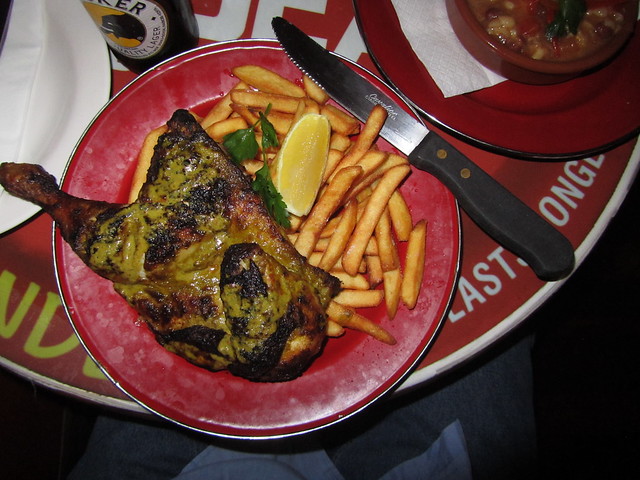 I had Bunny Chow, which has no rabbit, but was a Malaysian-style chicken curry (they didn’t even skimp on the chilli), served inside a hollowed-out bread roll! Hubby says it was because rice wasn’t free available in South Africa in the old days, so the Malays had to serve their curries with the carbs they could easy access. 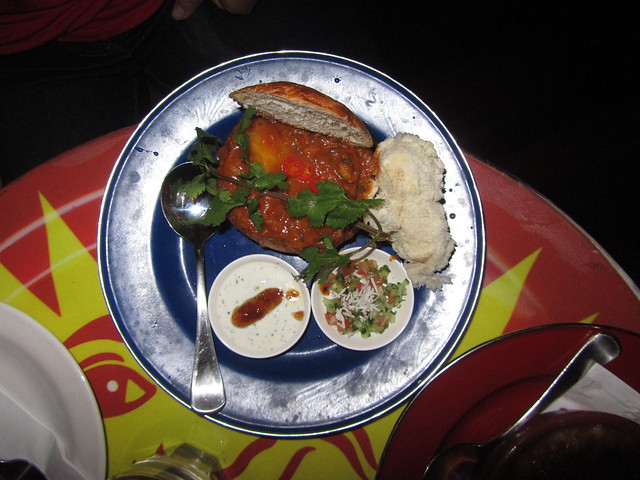 We also ordered a side of Samp (corn) and Beans – two ingredients easily grown in this mostly arid region and most commonly eaten by the Africans. 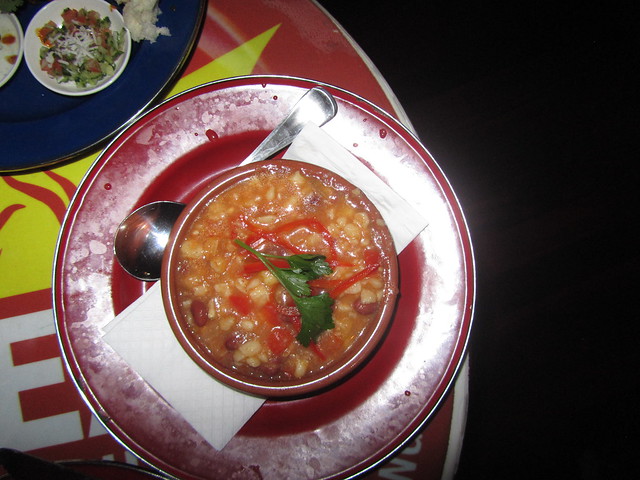 At the beginning of March I started on this cardigan. I had followed Kate Davies’ blog for a few years but never had the courage to start one of her projects – many of them looked to complicated for someone of my experience. I only plucked up the courage this year, and decided to cut my teeth on the Bláithín (Gaelic for ‘little flower’) cardigan.

From Kate’s blog posts I got an inkling that this cardigan was to be my most complex project ever, and after reading the pattern I knew I wasn’t too wrong. It basically combined all the techniques I’d learned in the last 3 years, plus many more. Knitting in-the-round, short rows, provisional cast-on for starters, followed by i-cord bind off, insert pockets, Fair Isle colourwork, and scariest of all, steeking. That’s when you cut your work in half to turn it from a jumper into a cardigan. Argh!

In the end, the cardigan took me almost 4 months to complete, with many trials and tribulations along the way. Luckily, it didn’t turn out too badly. 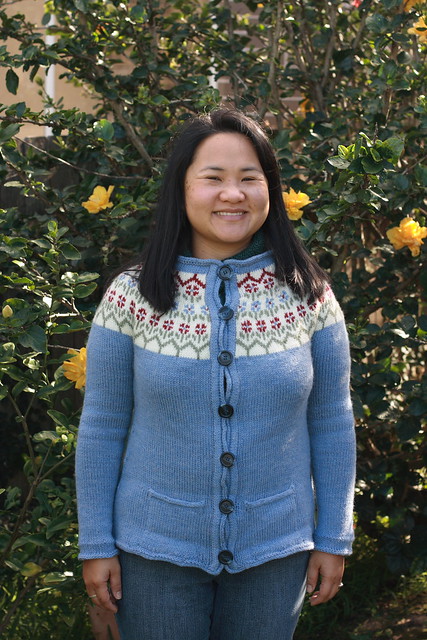 As a bonus, I’ll even get some use out of it this winter! Note to self: next project will definitely be a short one.

One final look at Boat Harbour and Gerringong. I like how the water on the rock platform reflects the rolling hills. 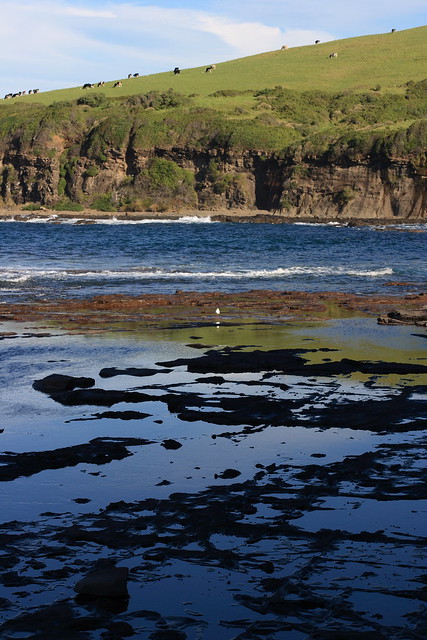 It really was a gorgeous day in a gorgeous place. Pity that all this is might be gone soon. I spotted a few paddocks that were up for sale for future development. In 10 years time Gerringong might turn into Kiama.