It’s been a seriously long time since I visited the Illawarra coast line north of Wollongong. In fact, the last time I posted about the area was back in 2009!

Since then, the Sea Bridge at Coalcliff has become a bit of a tourist attraction, and on a day out with M, we decided to see what the fuss was about. We started the walk on the north end of the bridge, and walked down to the south end to get this view. 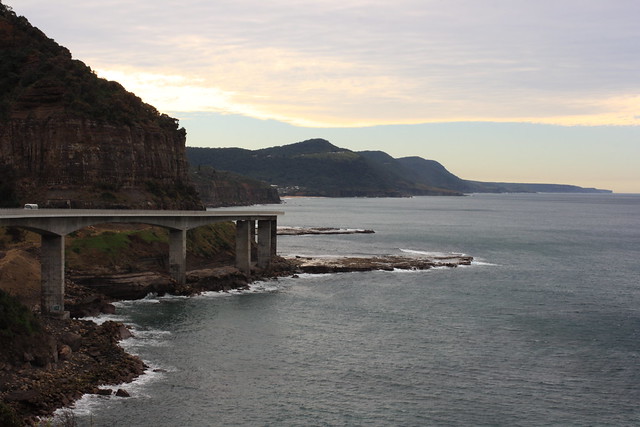 Just note that it was very windy there out on the bridge. The view of the coast was better when you’re walking south to north, but only in the morning/late afternoon/cloudy days. And do not attempt to do a ‘Titanic’, as we saw some Chinese tourists do in the middle of the bridge. I mean, really?

The venue for the reception was slightly out of town at Melross & Willow’s Estate, in a converted barn. By then the clouds were threatening to burst, so there wasn’t any croquet or skittles, but the view was still spectacular. 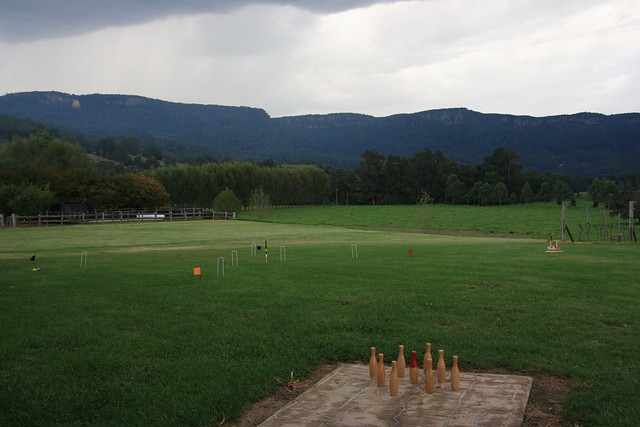 The estate is also a working horse and cattle property, but I’m guessing that it might have been a dairy as well at one stage. These days, it’s all about the wine. 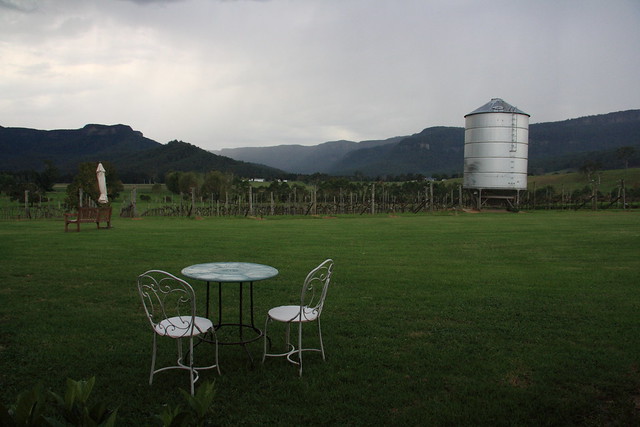 The wedding was in the very quaint St Joseph’s Catholic Church, in Kangaroo Valley village. 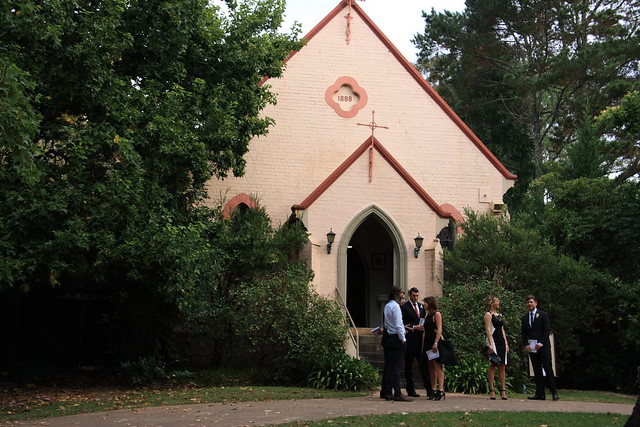 Quaint because it was built in 1888 and as you can see doesn’t seat very many people – everyone really needed to squash in! 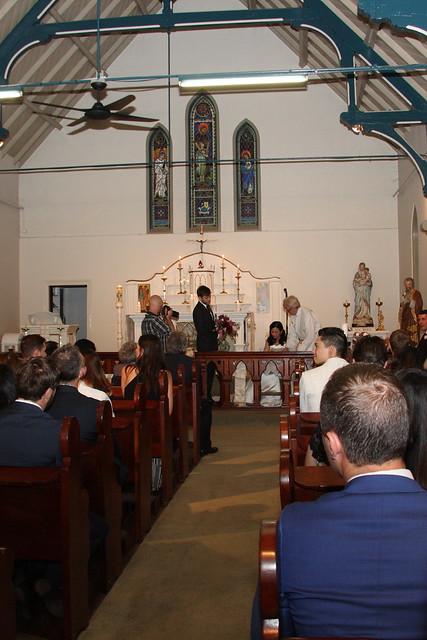 As with a lot of 19th Century churches, there are the obligatory stained-glass windows. These are modest but colourful, reflecting the farming community that it served back when it was built. 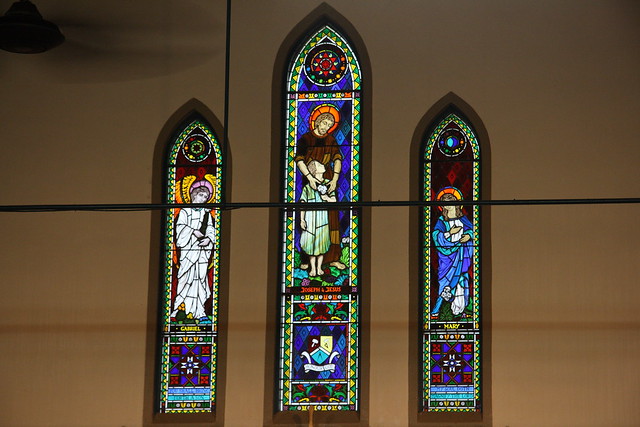 We spent last weekend in Kangaroo Valley for my cousin J’s wedding. I hadn’t been in Kangaroo Valley for close to 15 years, and it’s certainly gotten busier in that time. I remember only the ice cream shop in the village before, and now there is a dozen places to eat as well as shops of all sorts. But one thing that hasn’t changed is Hampden Bridge. 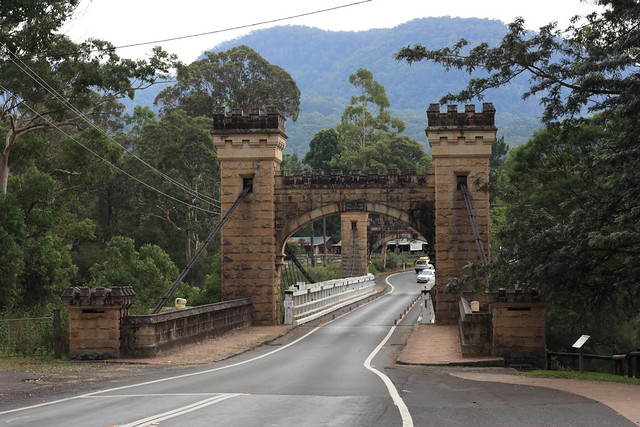 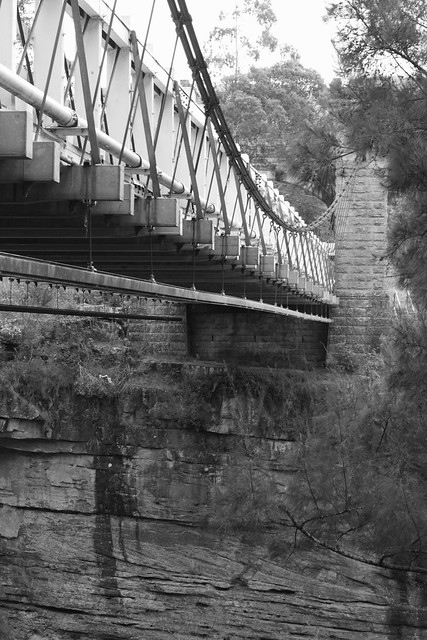 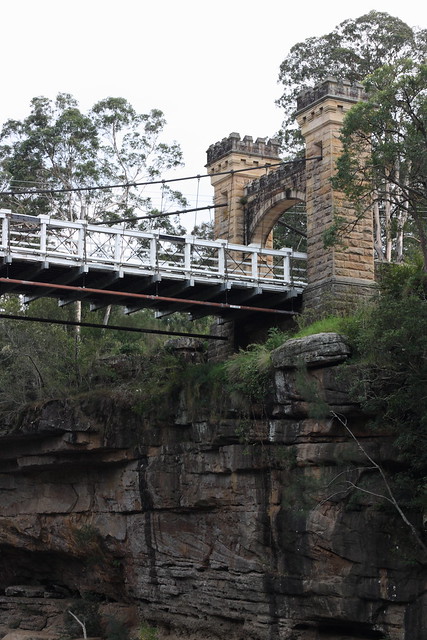 I forget sometimes that autumn is also a great season for flowers as much as spring. At Jamberoo Abbey, the silhouette of this rose caught my eye one morning. It’s like one last hurrah before winter kicks in. 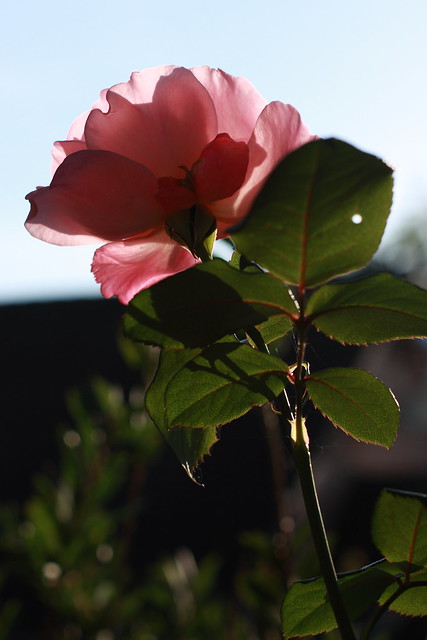 My visit to Jamberoo Abbey this year occurred two weeks after Easter. As usual, I wanted to capture the avenue of trees in all their autumn glory, but due to our very long summer this year, the leaves had only just begun to turn. Nevertheless, they were always a delight to walk through, especially in the early morning. 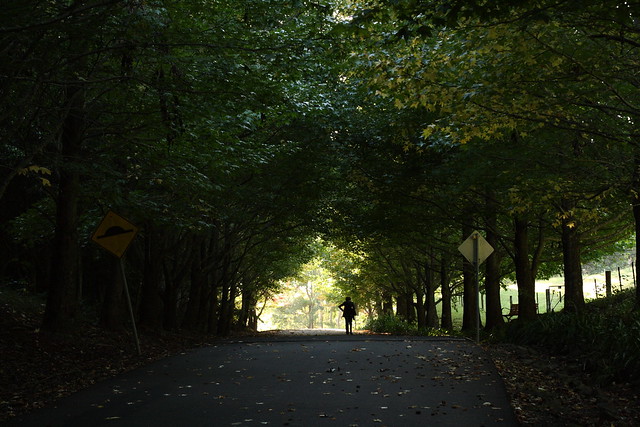 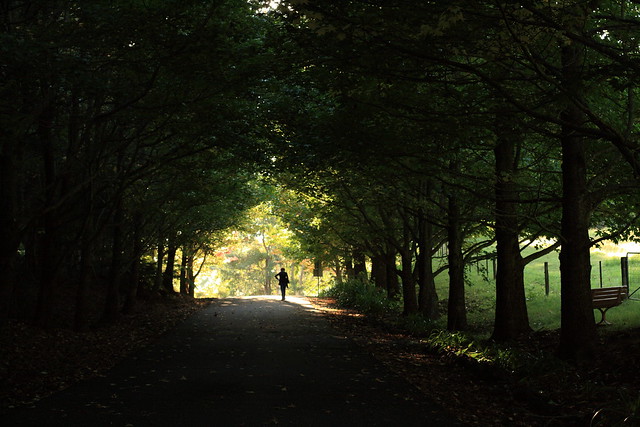 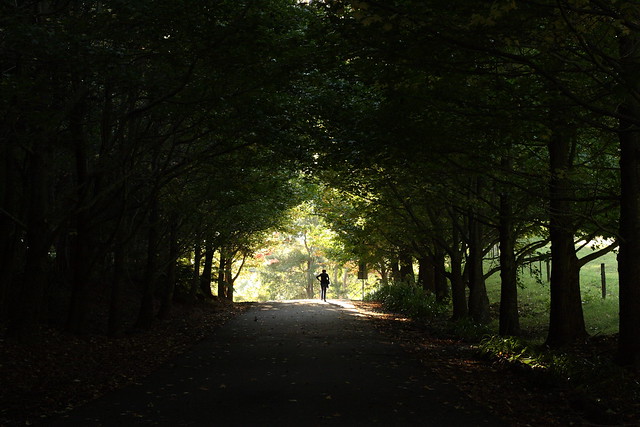 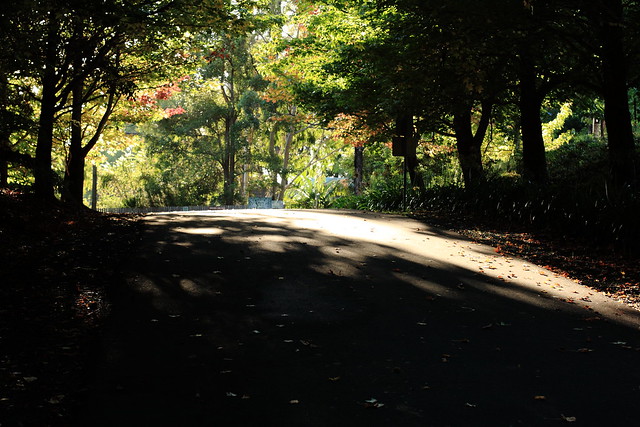 When I walked down the avenue the next morning, the sun was just emerging over the hills, producing a wonderful halo effect. 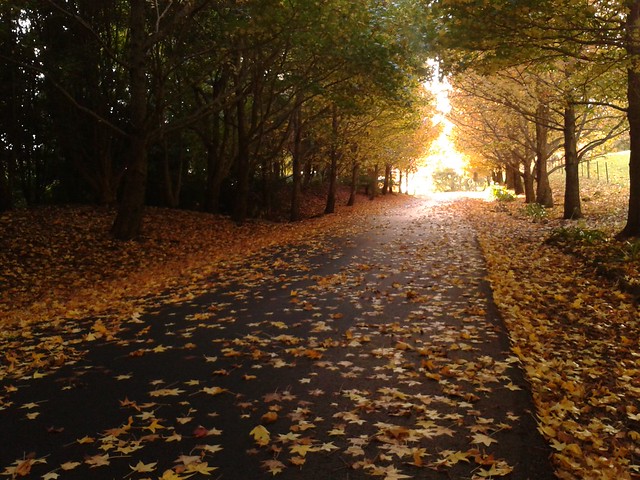 The fallen leaves on the road were lit up as if they were in spotlight. 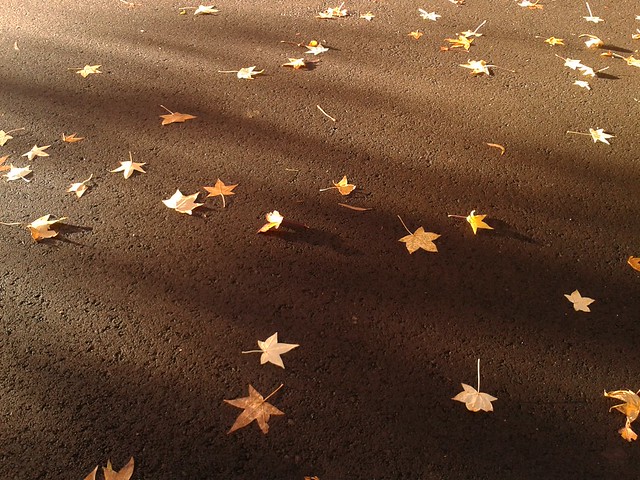 But the wind was rising. By lunchtime, the clouds had rolled in and by mid-afternoon so had the rain. It was the beginning of what was to be a very stormy week, as we now know. However, let’s leave this visit to the Abbey on a more sunny note. 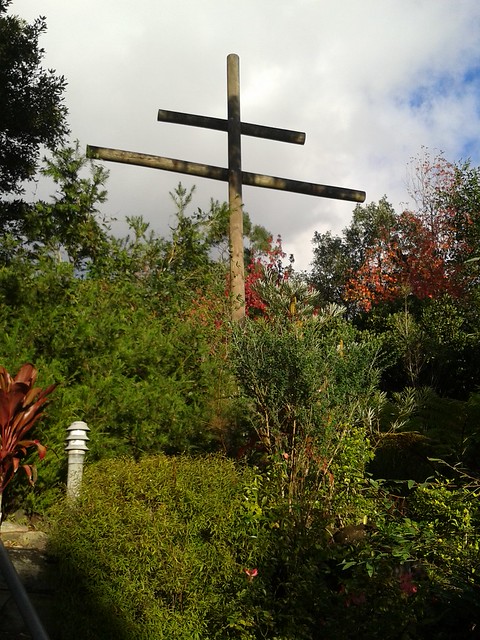 Just before the big storm, I spent a few days at Jamberoo Abbey. I came by train and taxi this time, instead of driving down from Sydney, and I must say it’s a good way to come, as the train journey to Kiama really quietened the mind. But that also meant that I couldn’t bring all the things I usually brought in the car – my SLR camera was out! I must say I was regretting it when I was greeted by this. 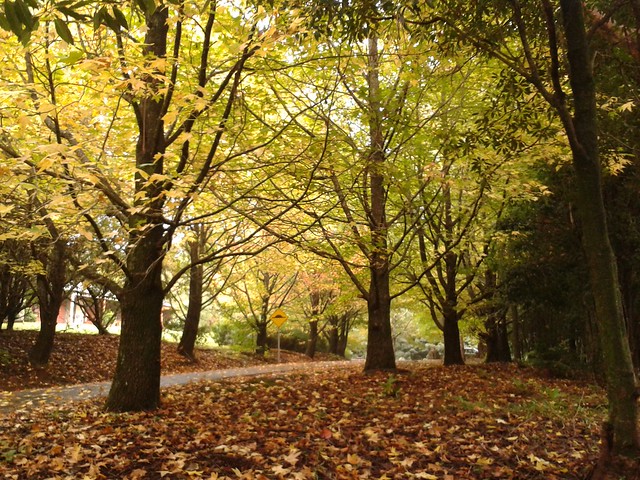 Nevermind, I still had the camera in my phone, and I guess it didn’t do too badly. 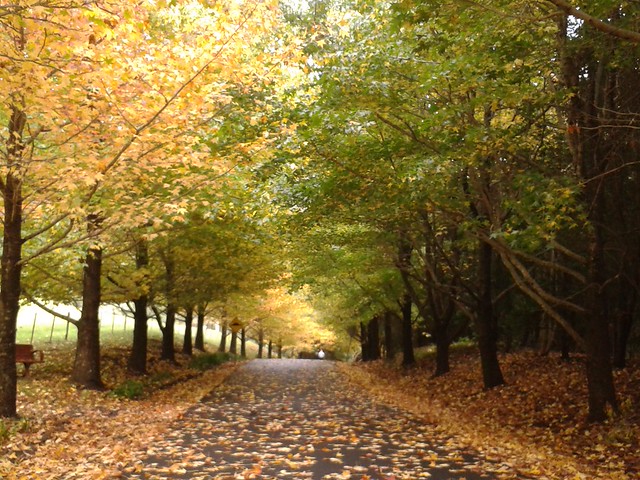 The pebble beach was very picturesque. It reminded me a lot of the beaches we found in England. 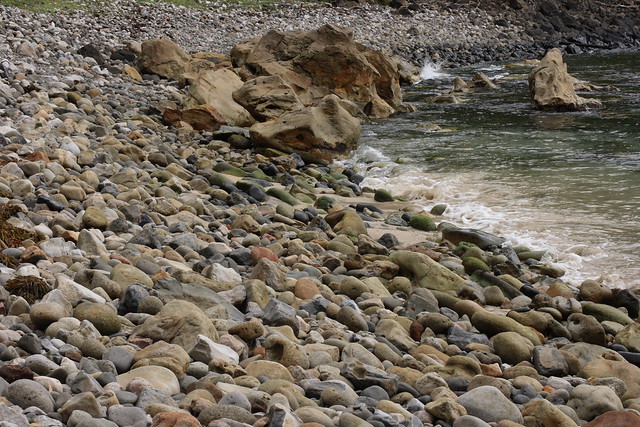 I like that there was plenty of colour variations… 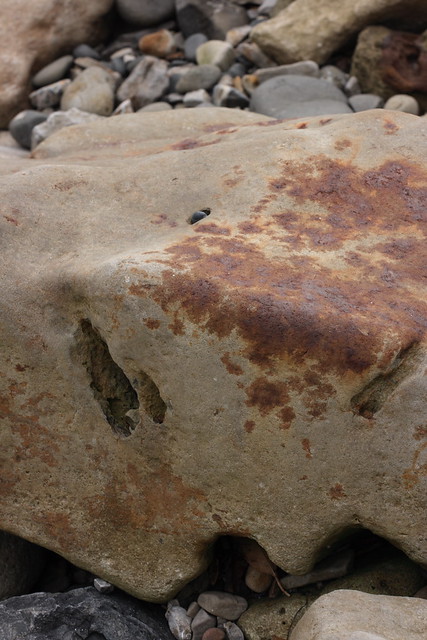 And so many different shapes. The weather is a wonderful artist. 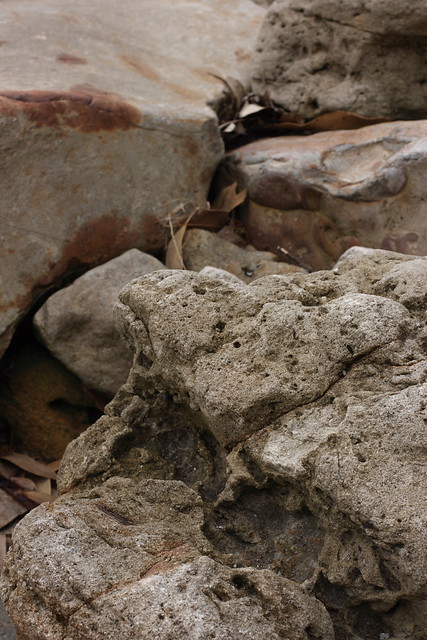 Earlier this week I tagged along with Hubby on a field trip down to the South Coast town of Mollymook. More specifically to a little-known cove, Jones’s Beach, on the north side of Bannister Head. Hubby came with his student to collect some basalt rocks for further analysis. 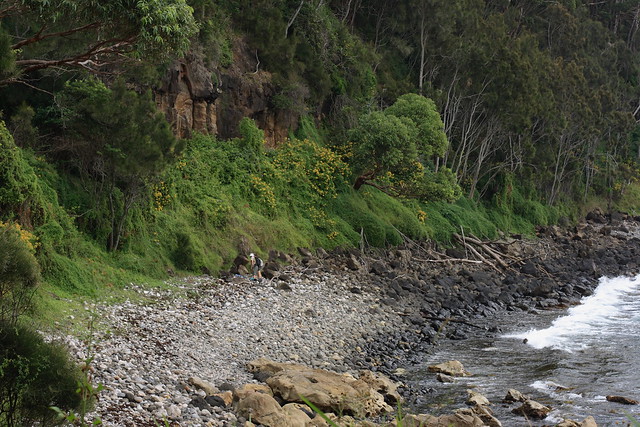 I came to enjoy the view. It’s like a place that time forgot. 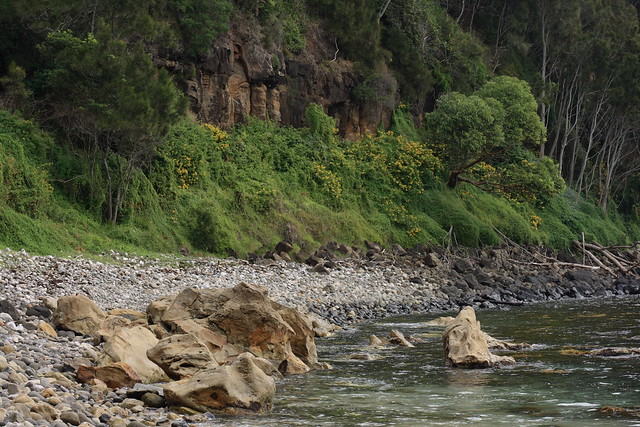 There was a pebble beach, weeds, and lots of gum trees towering over the water. 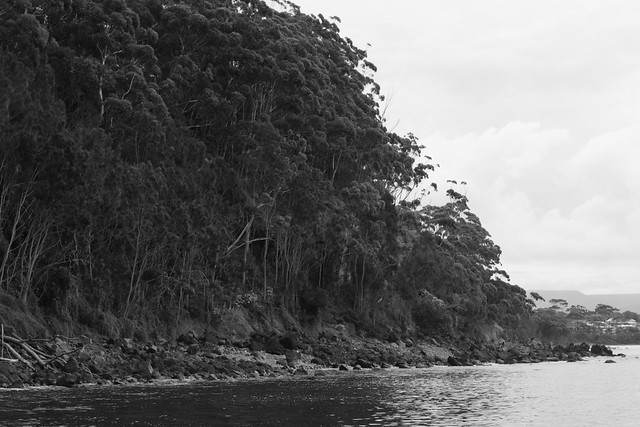 What a little gem.