Minerals also feature in my collection. My favourites tend to be colourful specimens, like this polished heart-shaped calcite. 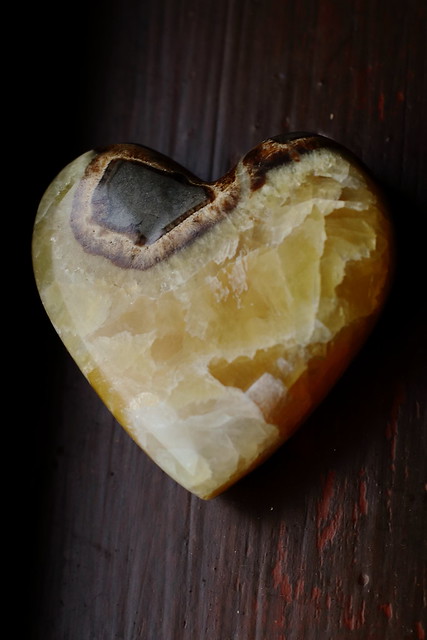 A favourite in terms of colour and pattern is malachite. I like this polished specimen that I bought in Cape Town that’s from the Congo. The swirls of green are very striking. 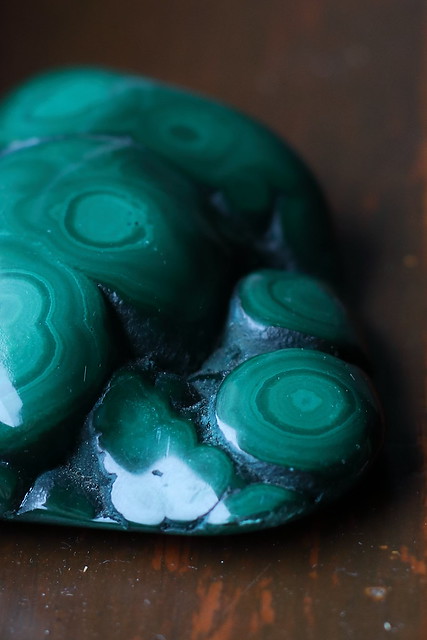 Kawaguchiko is a tourist town through and through. There were plenty of large hotels by the lake trying to cash in on Fujisan. 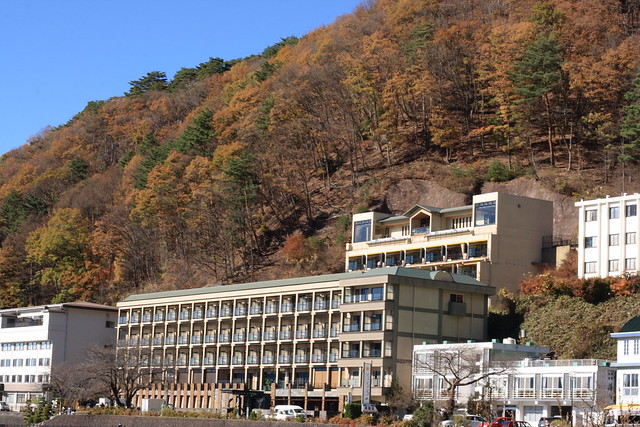 The town had a few quirky sights, like this sculpture. 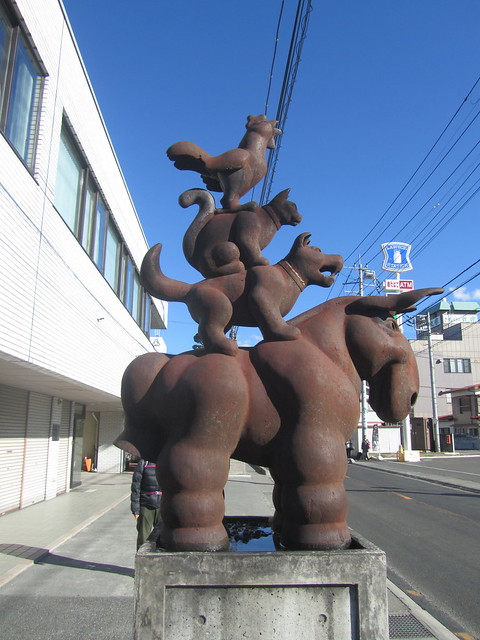 We found that the Japanese really appreciated geology. Unlike in Sydney where you’re lucky to find a mineral shop or museum in the entire city, there were little shops and museums everywhere. This museum had an extensive and impressive collection. 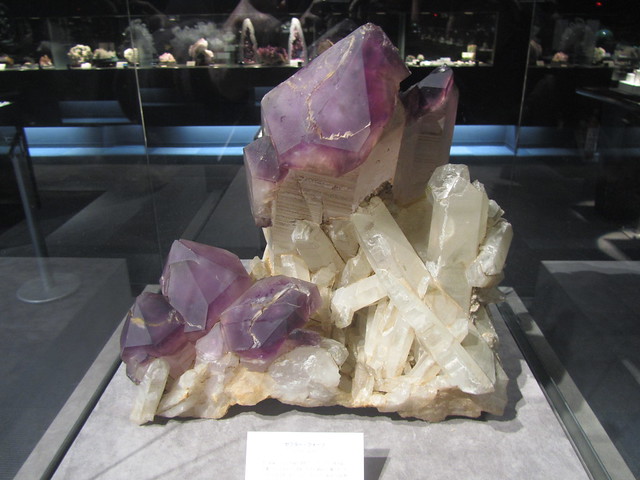 And what is a town without a big event – like a marathon right in front of our hotel. 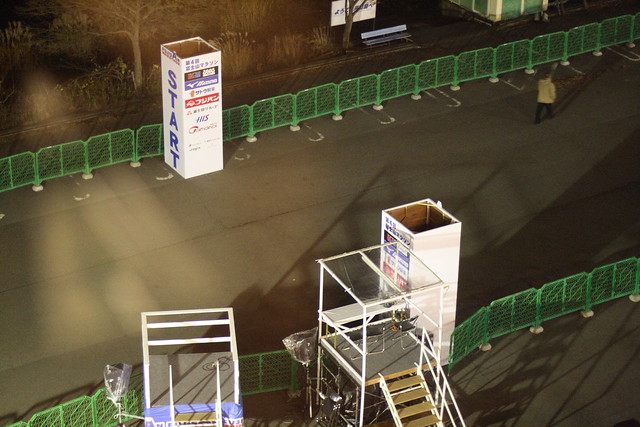 But I think the meals, and its setting was a bit of a tourist attraction in itself. This was our dining room at the hotel. 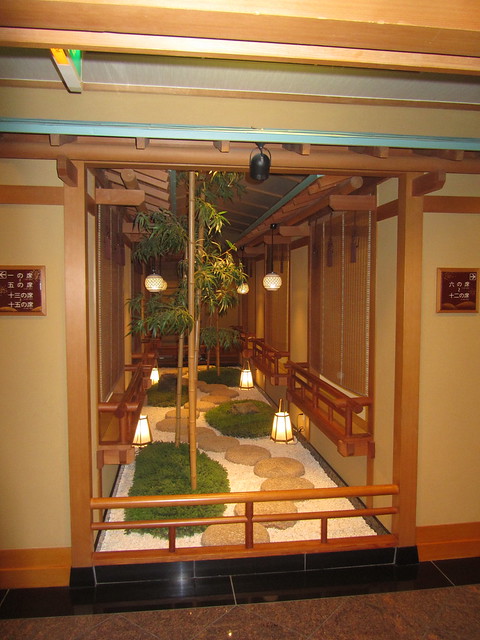 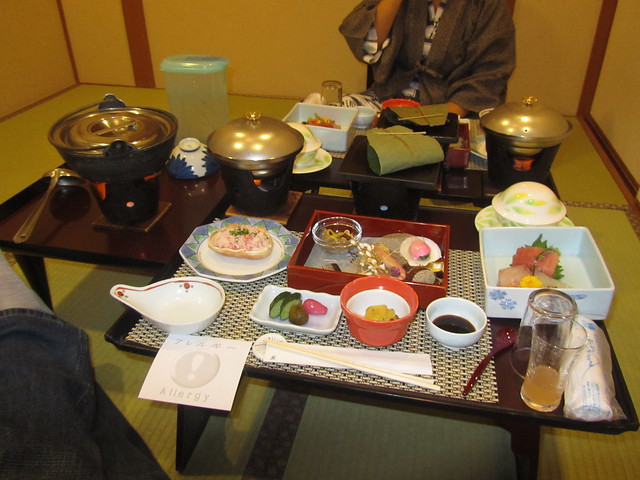 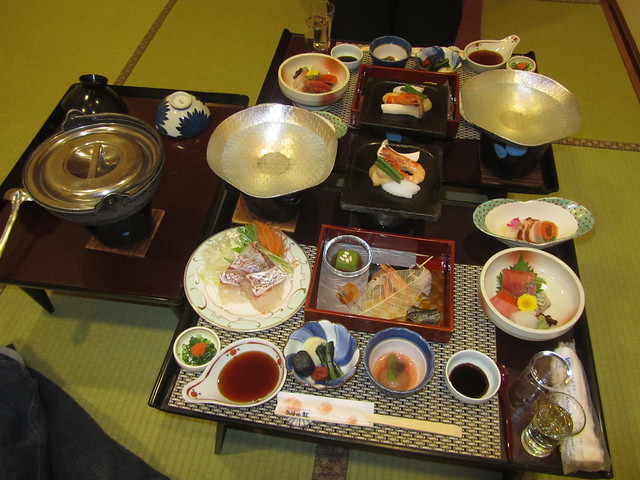 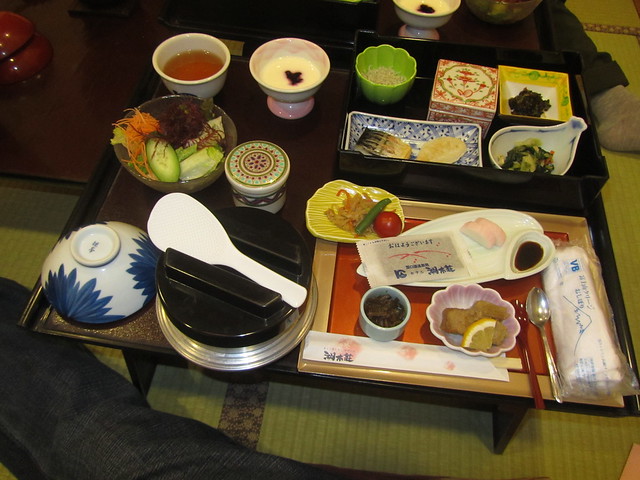 In between, we just had enough room for a simple bowl of ramen. 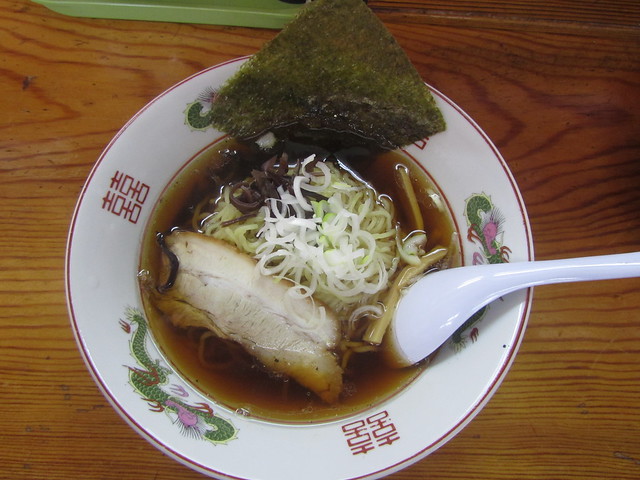 The marathon began on the morning of our departure, and we struggled against the tide of thousands of eager runners to reach the train station. No rest for us though, we had another train to catch.

Also in the main precinct, and the purpose of our visit, was the old Primary School. Its size gave you an idea of how big the town was in the gold rush. 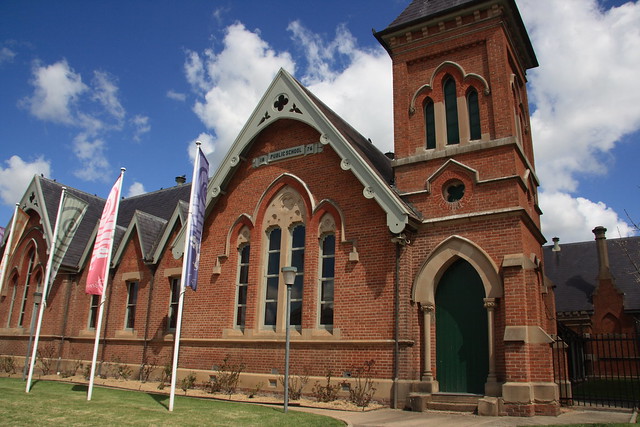 Now it houses the Australian Fossil and Mineral Museum. 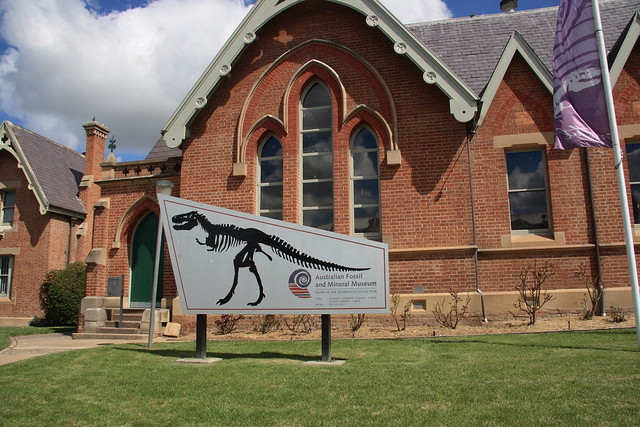 Inside, there was a very beautiful collection of minerals from all over Australia and the world, but I was more interested in fossils. There was an impressive cast of a T-Rex skeleton. 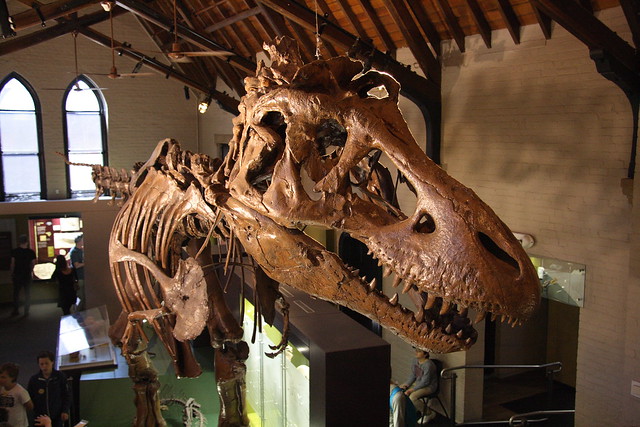 But this weekend trip was all about marine fossils, particularly trilobites, an animal crossed between a crustacean and a centipede. These were common-place around 400 million years ago, but were wiped out in an extinction event 375 million years ago, possibly when the sea-level changed dramatically and the oxygen content in seawater decreased.

Their fossils are now found all over the world. The most spectacular specimens are from Morocco. 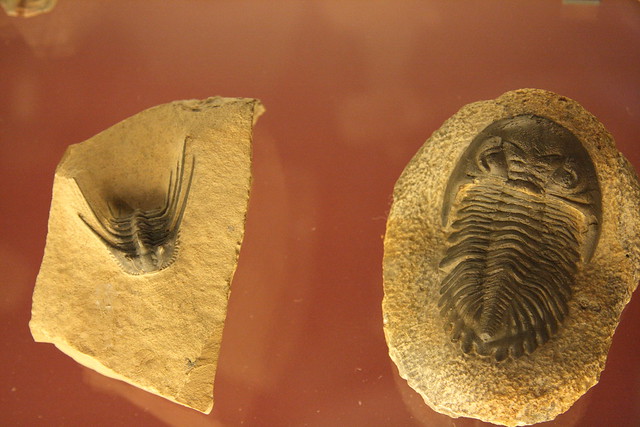 But Australia also has its fair share. These great specimens are from Kangaroo Island in South Australia. 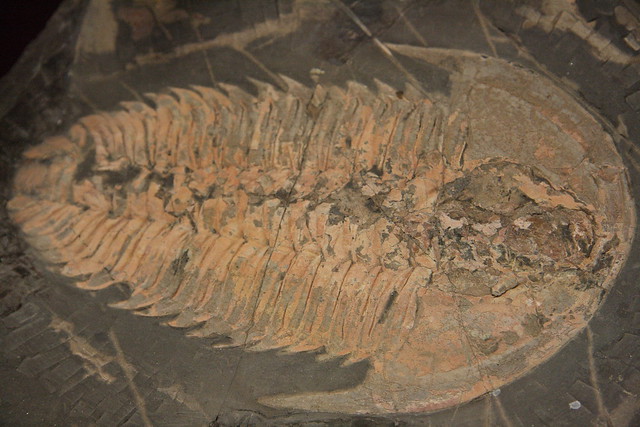 Next stop was the busy city of Bathurst. Its roundabout was in full-swing as it was Saturday lunchtime. 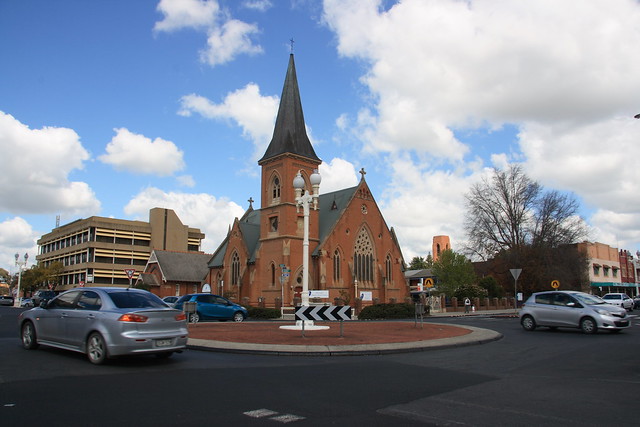 The Bathurst region was one of the first areas in Australia to be hit by the gold rush. This plaque marked the beginnings of it all. 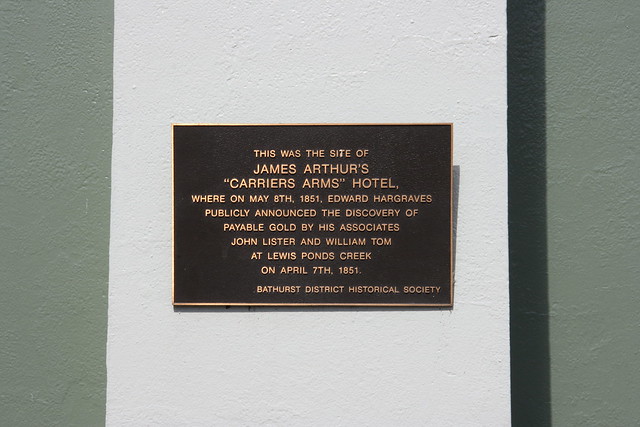 The old Bank of New South Wales has stood by it all, good and bad. 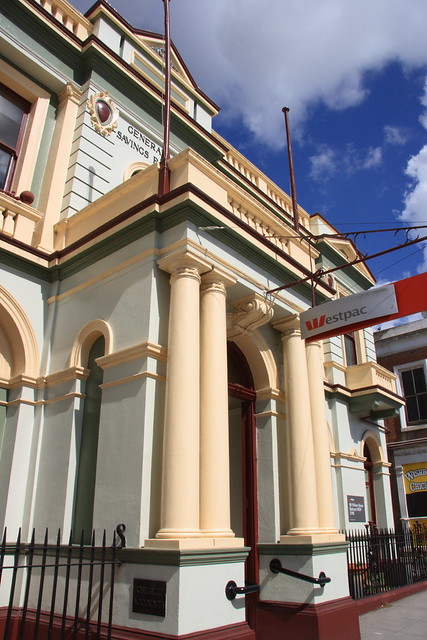 We turned back from the crater to walk back to the beach. The blue sky and sea made a dramatic contrast to the crater.

Near the beach, we visited the remnants of the old sulphur mine. At the turn of the 20th Century, some very hardy souls tried to mine the deposits of yellow sulphur. Sulphur was used in medicines, as sterilisation, in match heads, and in fertiliser, so they thought there was a buck to be made.

Living on a volcano had its downsides. Food and water had to be brought to the island, however since the Bay of Plenty was frequently rough, supplies weren’t guaranteed. The air quality (as we found out) wasn’t great, and the sulphuric acid ate away at everything. But most crucially, a hundred years ago they didn’t have seismic monitoring and so when part of the rim collapsed in 1914 creating a lahar (a mudflow made up of volcanic material and water) the 10 workers on the island didn’t have a hope. The only survivor was the camp cat, Peter, which was found a few days later. He was appropriately renamed ‘Peter the Great’ and became a local celebrity.

They had another go at mining a few years later, but the amount and quality of sulphur wasn’t great and so mining was abandoned; the buildings and equipment left to corrode in the sulphuric fumes.

We returned to the boat, and on the way back to Whakatane passed by a New Zealand fur seal colony nearby. At least these guys can get away quick smart if the volcano gets twitchy.

The boat sped off back to land, and soon the volcano was once again steaming away in the distance. This was one adventure we won’t forget in a hurry.

Freiberg had a castle (Schloss Freudenstein in German). After falling into disrepair, the city restored it to house its world-class mineral collection, Terra Mineralia, which holds beautiful minerals from around the globe.

I had a go at painting the schloss, although all the windows and slanted roofs drove me a bit mad.

We didn’t stay in Dresden long though, as our destination was the small town of Freiberg, 30km away.

This pretty town made its fortune from its silver mines which had been in operation since the Middle Ages. The town’s university still has a school of mining operating.

Given its wealth, there was a lot of intricate decoration. The East Germans loved the town so much that they even restored the town to its full glory in the 1980s, when much of the country was neglected.

It was our first taste of Germany. More to come.

From Dorset we travelled to the most south west corner of Britain. You might know or have been to Land’s End, but there were far more interesting things to learn about this corner of the world.

Cornwall might be famous for its seaside and its cream teas, but its original claim to fame is its natural resources. Cornwall is a place rich in metals – tin and copper in particular – and even as far back as the Bronze Age (more than 2000BC), everyone in civilised Europe knew of it. In the Bronze Age, Tin from the Cornish was traded as far east as the Minoans in Crete, who consequently built their empire from it. The Cornish locals must have gotten very wealthy.

Back in those days, the tin and copper deposits were very close to the surface, and could be dug out from shallow pits, but as time went on, the miners had to dig deeper and deeper into the ground to get their bootie. By the time the Industrial Revolution came about, mining in the area was done on an epic scale.

This is the remains of the Levant Mine from the Victorian Age, near the village of Pendeen. It closed in the 1890’s and is now part of a World Heritage Site. Back in its heyday it employed around 170 people. You can see the remnants of buildings and stacks at the top of the cliff.

At the bottom of the cliff you can see the old pumphouse, which pumped the seawater out of the mine, since it was so close to the water line. The whole countryside is riddled with shafts, and shafts were dug as far out as a mile out under the sea. The shafts are still there, and one shouldn’t go underground unless you are with someone who knows them well since you can easily get lost. In recent years there have been incidents where people have died in shafts as they couldn’t find a way out.

The old mine is now on crown land, and the famous South West Coast Walk winds its way through it, so everyone can see what mining was all about.

On the way back to Adels Grove, we stopped by an abandoned mine called Lilydale. Back in the turn of the 20th Century, Lilydale was a silver, lead and zinc mine that supported hundreds of miners. The only problem (and it was a big one) was lack of water. The nearest creek or river was at least 10km away, and as a consequence many miners died of thirst, and the mine was eventually abandoned.

All that was left were the trenches where they dug, the small mounds of slag, and the odd scrap of metal.

As with many ventures in the Outback, this was one that nature won.

In the mine, you could see cross-sections of the limestone. How the minerals and water crystalised and formed calcite.

But what was this phosphate they were digging out? The phosphate in this particular mine was formed from decomposed bat guano. That’s right, it’s very, very old bat poo from the Pleistocene (around 1 million years ago). You can see it here as the white bits.

And here seaping into the rock crevices.