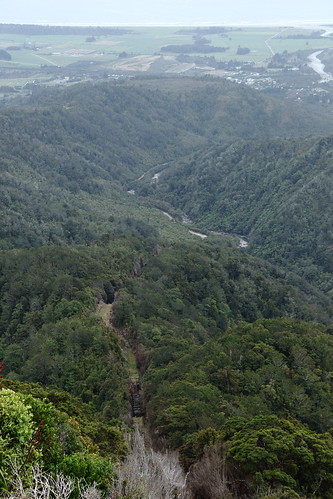 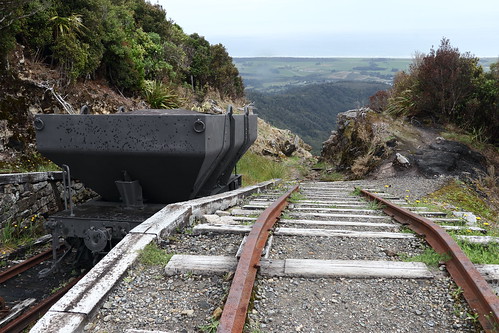 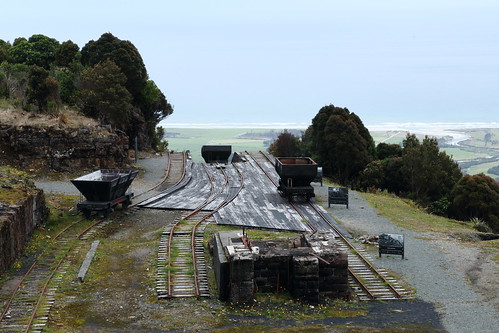 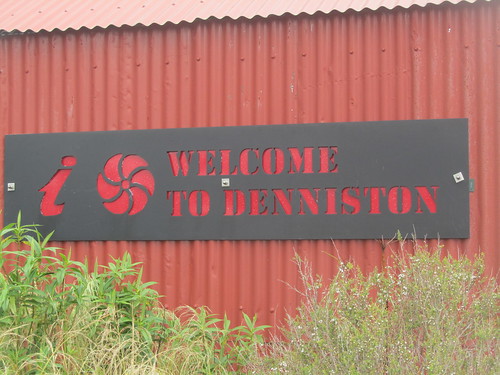 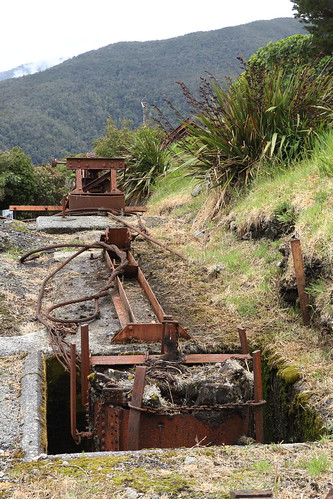 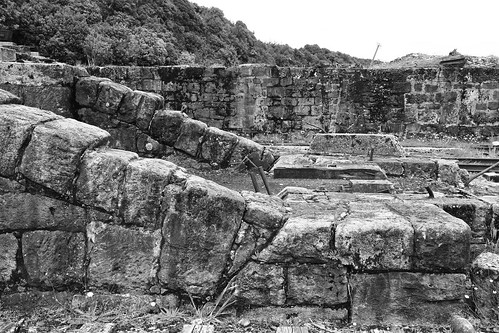 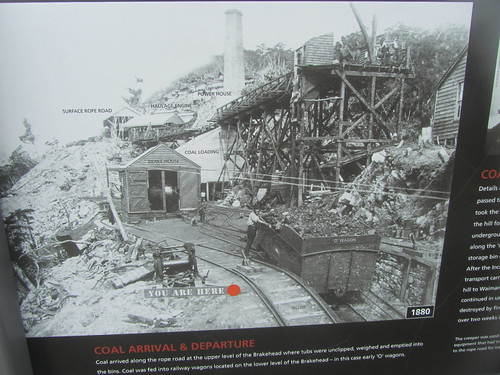 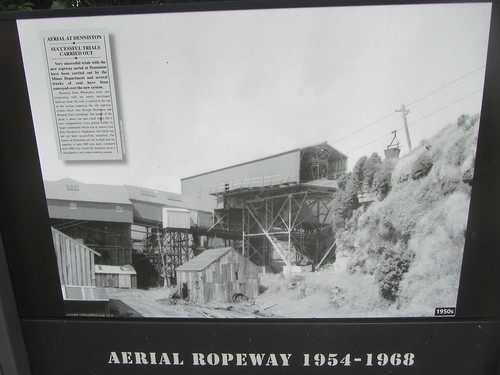 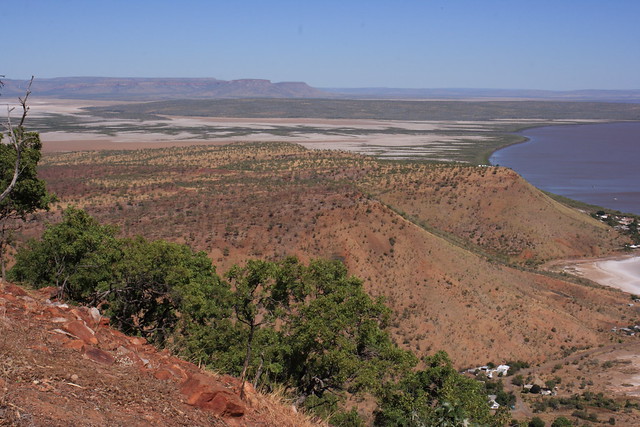 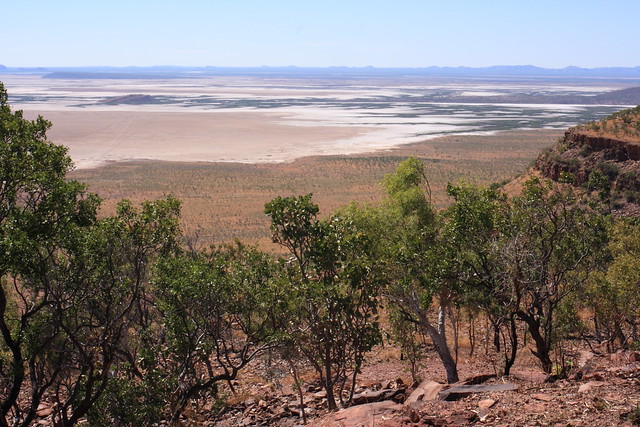 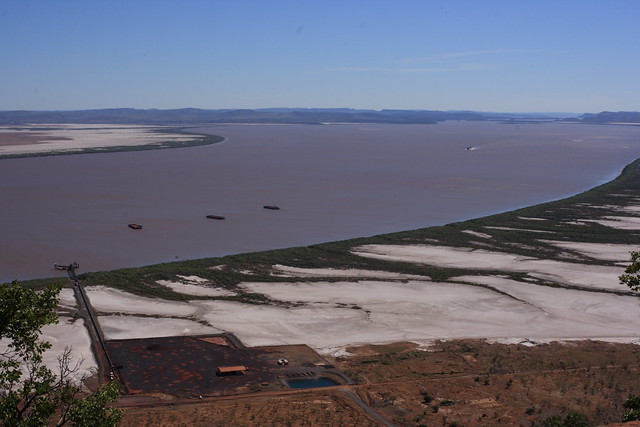 We turned back from the crater to walk back to the beach. The blue sky and sea made a dramatic contrast to the crater.

Near the beach, we visited the remnants of the old sulphur mine. At the turn of the 20th Century, some very hardy souls tried to mine the deposits of yellow sulphur. Sulphur was used in medicines, as sterilisation, in match heads, and in fertiliser, so they thought there was a buck to be made.

Living on a volcano had its downsides. Food and water had to be brought to the island, however since the Bay of Plenty was frequently rough, supplies weren’t guaranteed. The air quality (as we found out) wasn’t great, and the sulphuric acid ate away at everything. But most crucially, a hundred years ago they didn’t have seismic monitoring and so when part of the rim collapsed in 1914 creating a lahar (a mudflow made up of volcanic material and water) the 10 workers on the island didn’t have a hope. The only survivor was the camp cat, Peter, which was found a few days later. He was appropriately renamed ‘Peter the Great’ and became a local celebrity.

They had another go at mining a few years later, but the amount and quality of sulphur wasn’t great and so mining was abandoned; the buildings and equipment left to corrode in the sulphuric fumes.

We returned to the boat, and on the way back to Whakatane passed by a New Zealand fur seal colony nearby. At least these guys can get away quick smart if the volcano gets twitchy.

The boat sped off back to land, and soon the volcano was once again steaming away in the distance. This was one adventure we won’t forget in a hurry.

Being on a geology tour, we had to visit a mine or two. Coromandel is rich in resources. In fact, they had their own gold rush around about the same time as the Australian one in the 19th Century. Nowadays the only kind of mining that’s really viable is the open cut mine. This one in Waihi extracts mostly silver, and it’s actually very small compared to the giant iron ore mines in Australia.

Perhaps there may be a future miner/engineer/geologist among this lot?

I liked Freiberg. It was a small, quiet but pretty town, easy to get around, and not touristy at all. The Freiberg Cathedral (or the Dom St. Marien in German) and Terra Mineralia (that I described in an earlier post) was as touristy as it got.

From the outside, the cathedral (the white building) seemed plain indeed. Unlike the Catholic cathedrals, the Lutherans obviously weren’t so obsessed with bling, even though the town was rich from the silver mines nearby. You had to get your ticket from an adjoining office, and the lady there kindly opened up the church for you.

Step inside, and it was certainly a different kind of church. Even though the architecture was gothic, the rendering made the space seem lighter.

Some of them were very life-like.

We didn’t stay in Dresden long though, as our destination was the small town of Freiberg, 30km away.

This pretty town made its fortune from its silver mines which had been in operation since the Middle Ages. The town’s university still has a school of mining operating.

Given its wealth, there was a lot of intricate decoration. The East Germans loved the town so much that they even restored the town to its full glory in the 1980s, when much of the country was neglected.

It was our first taste of Germany. More to come.

We didn’t just visit the Geevor and Levant mines, but walked south along the Coast Path to find other remnants of mining. Nowadays, the land has been turned back to grazing, mainly that of sheep. As with walking in the British Isles, there were a few stiles over stone fences to navigate over.

Sure enough, there were abandoned buildings and stacks all along the coast.

And the British weather never failed to surprise. We saw our fair share of rainbows that day.

But the weather cleared up just as we reached the Botallack mine site. This is also a World Heritage site, and is probably the most scenic mine sites you will ever see.

Where’s the mine, you say? The shaft entrance is down the bottom of the cliff. Needless to say, the miners got very wet when the tides were high. The miners dug shafts up to 500 metres deep and 400 metres out to sea. Once again, it was hard and dangerous work.

But as international trade ramped up during the Industrial Revolution, local mining work such as that in Cornwall dried up. Many Cornish miners immigrated abroad to find a better life. There are now descendants of these miners in USA, Canada, South Africa, Mexico, Brazil, Australia (in South Australia) and New Zealand (which I visited and will post about one day). It certainly explains how pasties and rugby and soccer got to all those places.

You might think it was the end of mining around Pendeen when the Levant mine closed in the 1890’s, but the lure of tin and copper was too hard to resist. In 1911, the Geevor Tin Mine opened up the hill to work the same area as the Levant mine.

The mine was worked through until 1990, and was the last mine to close in the area. When it first opened, it was mined by miners returning from the Boer War, but by the time WWII ended, miners were scarce, and the mine employed Polish and Italian miners. Working conditions improved over time – the shafts were properly re-enforced, they wore safety gear, they had proper head torches instead of oil candles for lighting, they had rules and regulations with blasting with dynamite, but life underground was still dirty, hard work.

The good thing about Geevor is that it is also covered under the World Heritage listing, and has since been made into a tourist attraction. It has a great museum, and interesting tours where they take you into the old processing plant as well as into an old shaft. We had a young man lead us around the site, and gave us many insights into life as a miner. At least now the old life won’t disappear completely from people’s memories.

The old Levant mine site was very extensive, and also very picturesque, perched as it was above the sea. The site was open for tours on some days, but being still in the ‘winter’ season, they weren’t too frequent here.

Back then, the old miners weren’t there to enjoy the scenery. Their twelve hour shifts didn’t start until they started working their shaft. If the shaft was a hundred metres or more underground, then it would have taken two hours or so to get down there. Added to that was the fact their accommodation each night was as far away as St Ives, almost 20km away, which they walked in the freezing cold. The miners were lucky to get four hours sleep per night. No wonder their average age was around forty. It’s a wonder they lived that long given the hard lives they led.

In the distance we could see Pendeen Watch, the lighthouse on the next headland. The Coast Path winds its way through all of this coastline. In fact, it starts on the north coast of the peninsula in Minehead, Somerset, and ends on the south coast in Poole, Dorset – 1013km or 630 miles! That’s a lot of coastline. Throw in the everchanging British weather, and the undulating coastline, and the mud, it’s a wonder that it attracts the thousands of visitors that it does. But the British do love their walks, and the stunning scenery and the (comparatively) mild climate are major drawcards as far as they are concerned.

Closer to Pendeen village, and a kilometre inland, is the newer Geevor Mine. We’ll go there tomorrow.