Well, it might have taken me awhile, but we’ve finally come to the final chapter of our 2019 Tasmanian trip – a short visit to Hobart. On this visit, we stayed in the historic inner city suburb of Battery Point. It is on a hill and so affords a good view of the Derwent River.

While wandering around the local park, hubby was happy to find out that it had had a famous scientific visitor in the past.

Wandering around Battery Point and its neighbouring suburb, Sandy Bay, we were happy to see a lot of colonial era houses still in good condition. Probably not surprising since they’re two of the most expensive suburbs of Hobart.

That’s all from Tasmania. But I’ve done some travelling since then, so I’ll be back with more adventures soon!

The last town we’ll visit on our tour of Western Tasmania is Strahan.

This town is also the smallest and the most remote, surrounded by thick forest, and being 270km and 301km by road to Launceston and Hobart respectively.

But despite its current size, this town is also historically one of the most important in the region due to its location on the shore of Macquarie Harbour, a deep water harbour, and the closest access point to the surrounding towns. The railway originally terminated here.

This harbour was a highway that carried ships that transported copper, gold and other resources, like timber from the surrounding forests, and in the 19th Century, convicts. Sarah Island is a small island in the harbour that was the home of the most secure penal colony in the land. I remember learning about this area in high school when we read the classic Australian novel, For the Term of His Natural Life by Marcus Clarke. The description of life on the island and a convict’s determination to escape it was especially vivid.

We’re back to rainy Queenstown on the west coast of Tasmania, and today we’re riding on a steam train.

The current railway consists of original locomotives and carriages from the same era.

It snakes through the wild west coast rainforest…

Up and down steep hills and across torrential rivers.

As you might guess, the railway would have taken awhile to construct through this trick terrain. Sydney-siders, you shouldn’t be complaining about this current bout of wet weather. Try living in Queenstown for a few months, or years. Although I have to concede that the rain in Queenstown generally falls more gently, like British rain.

We’ve had a very rainy summer in Sydney this year due to the La Niña effect. Rainy weather like this reminds me of our visit to Western Tasmania. This region is one of the wettest in Australia (rainfall averages 2400mm annually), and in this post we visit the biggest town in the region, Queenstown. Like its Kiwi counterpart, it is an isolated place on the West Coast of the island, and like the other towns of the region, it also has a strong mining history. 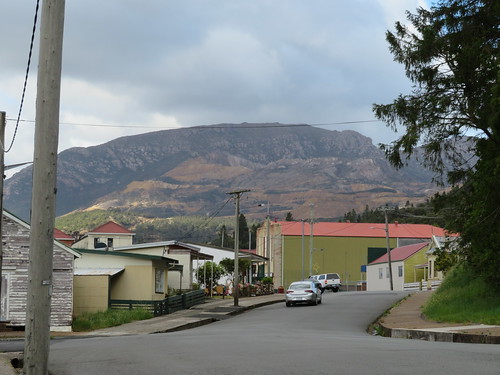 Mining goes back all the way to the 1880s. Historical buildings scattered through the town attest to the town’s long history. 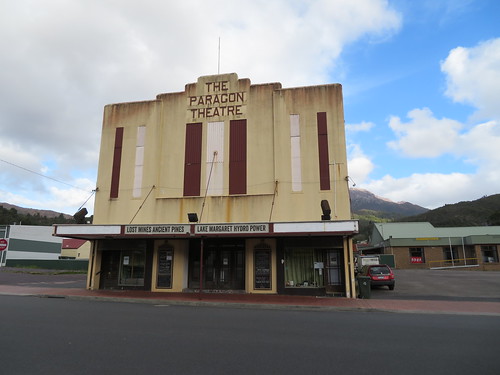 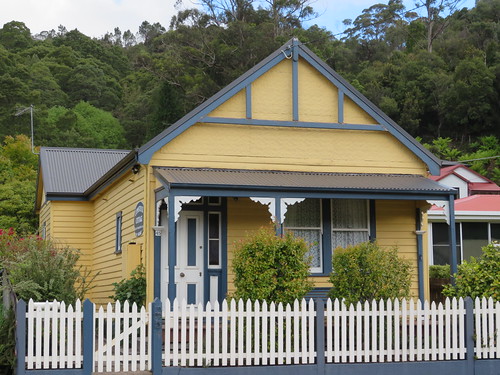 It started with gold, but eventually copper was the most lucrative metal. So much so that the town’s population grew to over 5,000. It wasn’t the mining itself that was the most ecologically damaging but its processing. The town had a few copper smelters that had to be fuelled, and the fuel of choice in the old-days was timber. So all the trees in the area were felled, hence the bare hills surrounding the town. 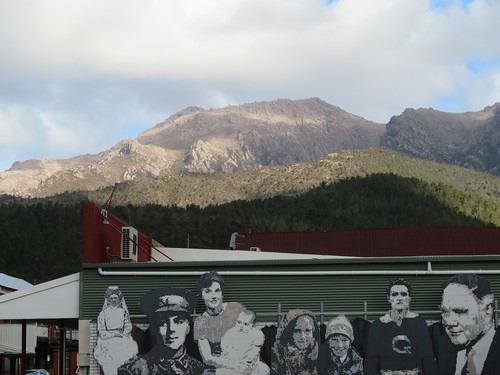 The high rainfall also meant that erosion was sweeping the topsoil away. The copper mine still exists but hasn’t been fully operational since 1994. Copper smelters no longer operate in town so the hills get a chance to slowly regenerate. But the lack of mining meant a lack of jobs, hence the population of the town has shrunk to under 1,800 and lots of shops remain empty. But there are people in town wanting to revitalise it.

Today we’re moving on to another mining town in western Tasmania, Zeehan. Zeehan has been a town since the 1880s, and continues to be a working mining town. The surrounding hills are rich in all sort of minerals – silver, tin, nickel, zinc to name a few (and those are just the common varieties). Signs of mining past and present are all around town. 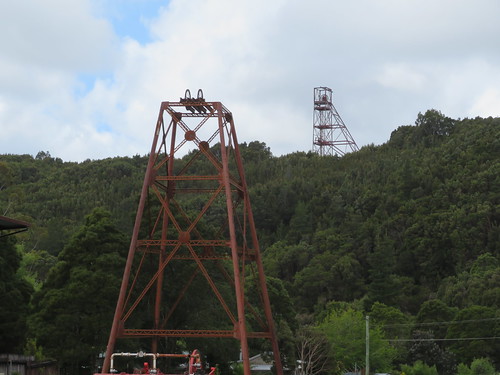 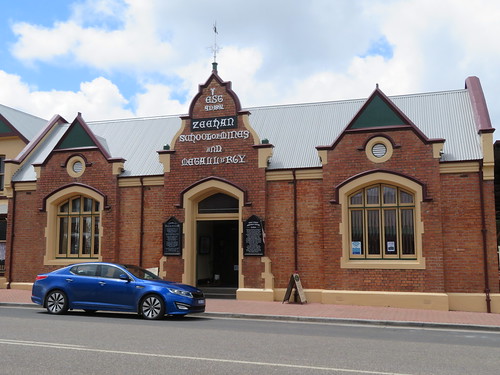 In the early 20th century, the town was as big as Launceston and Hobart. These days it’s a lot sleepier. 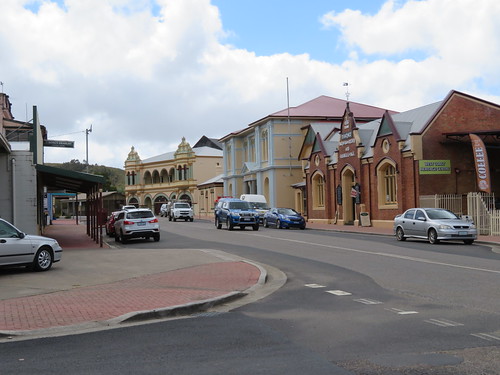 But by the grandeur of its main buildings, you can tell that it was once a wealthy town. 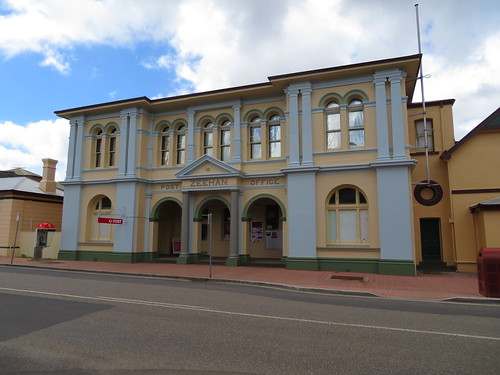 We’ll continue our trip around Tasmania with a visit to the West Coast. The West Coast of Tasmania is similar to the West Coast of New Zealand in a lot of ways. It’s wild, rugged, and still relatively remote. It’s covered with mountains and ancient temperate rainforests that date to the time of Gondwanaland. And it’s also got interesting geology and also economically valuable minerals.

We made a brief stop in the village of Waratah. 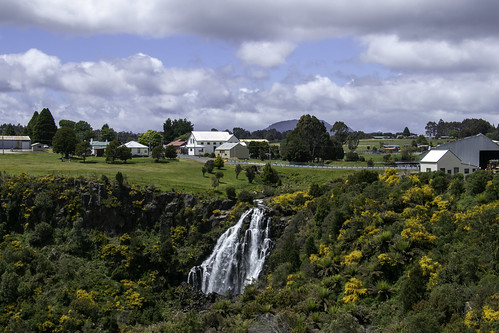 It doesn’t have much now in the way of infrastructure, but it is the site of the first tin mine in Tasmania, Mount Bischoff, back in 1873. Ever the historian, Hubby wanted to revisit the site, so off we went in search of the old mine.

After driving down a few tracks and a bit of walking, we soon found some old remnants. 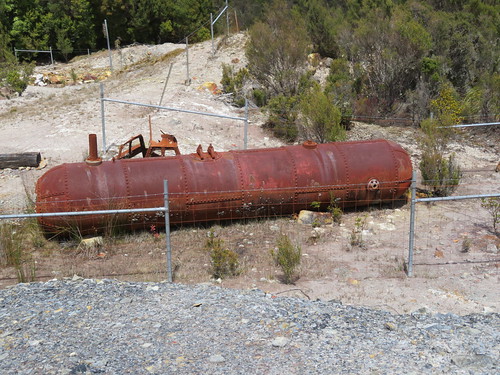 And the open cut wasn’t far off – it hasn’t been worked for awhile. 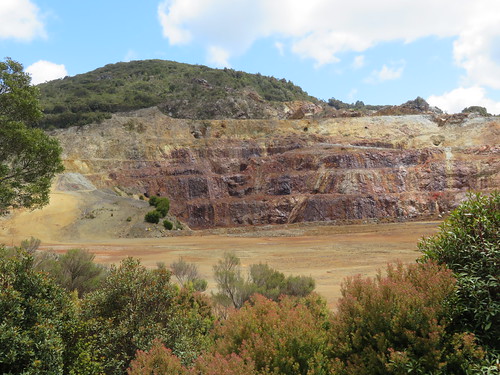 Freedom Day has diverted me from my blogging a little. I’ll try and get back on track this week with another post about the beautiful town of Stanley.

Stanley is a really cute historical town. Being founded back in the 1820s, it has a lovely selection of old buildings. 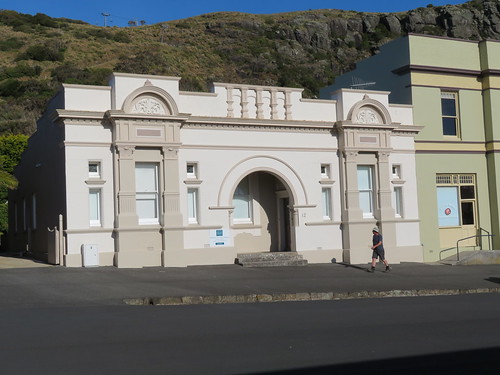 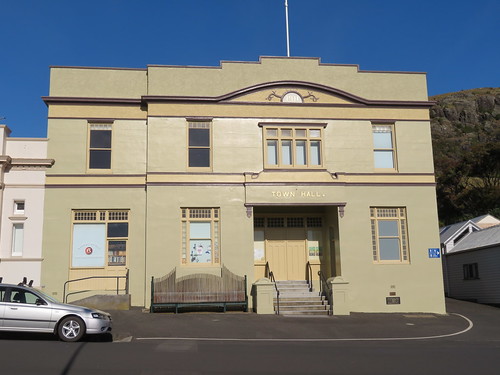 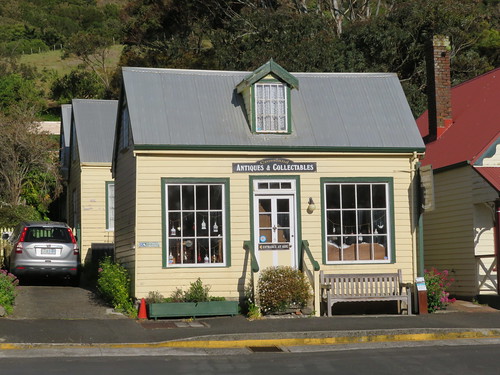 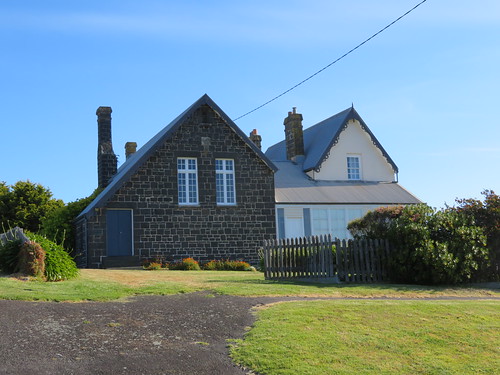 Its first industry back in the 1830s was whaling, and since then, successive generations have made their living from the sea or from agriculture. 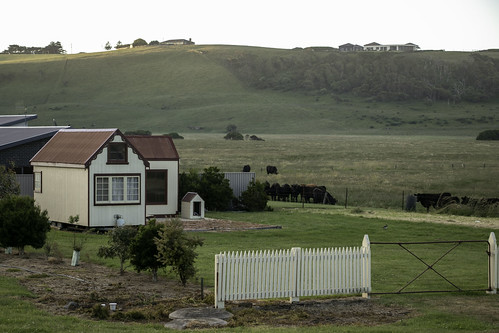 Its seafood is top-notch, as you can see from this fine example of ‘pub-grub’. 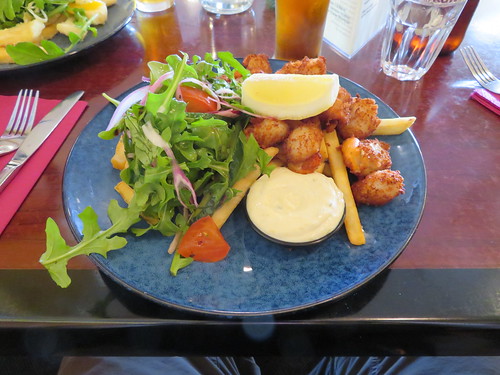 Our next destination was the town of Stanley, about 230km north-west of Launceston. 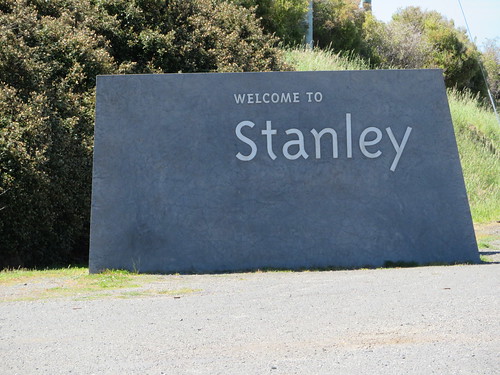 The road leading to the town was of good quality, with plenty of stopping places to view the ocean and scenery. 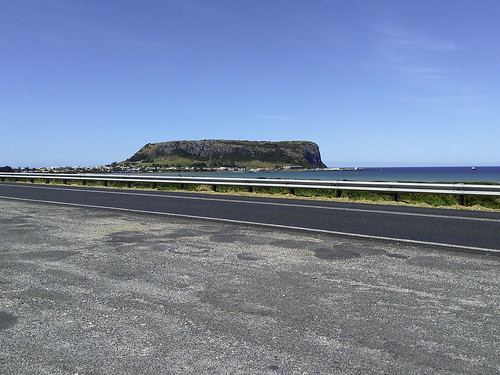 The town is located on the base of the ‘Nut’, an(other) extinct volcano, which the first peoples called Munatrik. 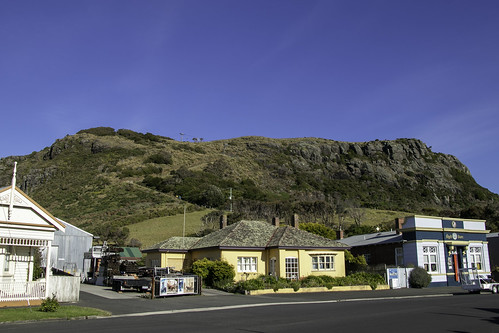 That’s all from Launceston, but it’s the beginning of our drive around Tassie. 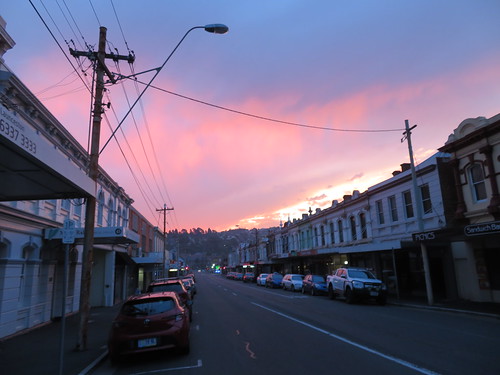 The next morning we made our way north along the Tamar Valley and stopped at the little town of Beaconsfield. It was up until 2012 a gold mining town. A mine collapse in 2006 contributed to its end.

The town was founded in the mid 1800s and was quite a prosperious place. Now it houses the Mine & Heritage Centre. 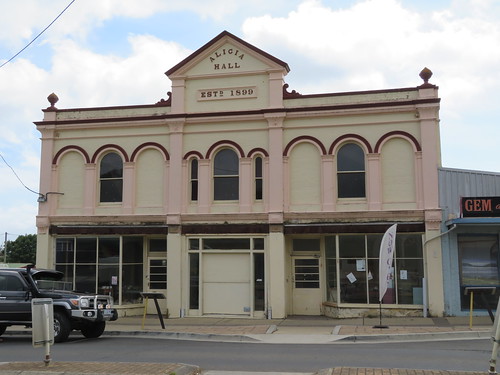 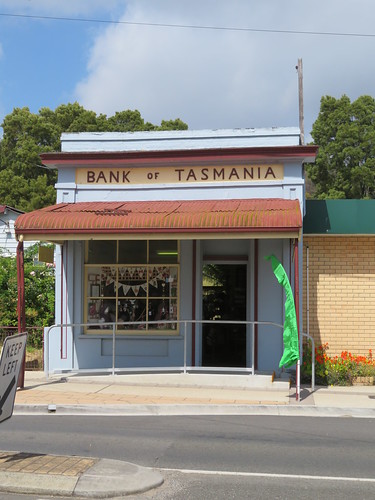 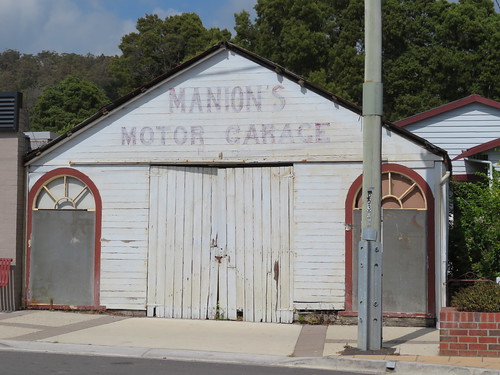 The New Zealand series is now done and dusted but there are plenty of photos left to go through from past trips. For the next while, I’ll be examining more of Tasmania, where we spent two weeks in December 2019.

The strongest memory from that trip was simply being able to breathe fresh air again, as Sydney had been under a smokey haze from successive bush/forest fires for months by that time. The trip starts up north in Launceston and ends in Hobart.

Launceston is a city I have visited, but generally only in passing. It was good to spend a few quiet days there getting used to the Tasmanian pace of life (which is generally relaxed).

Launceston is a sizeable town by Australian standards and pretty big by Tasmanian standards. Having its first European settlement in 1804, it is also quite an old colonial settlement, though the first Tasmanians arrived some 40,000 years ago, when the Bass Strait was still land, and were isolated from the mainland 8000 years ago when the sea levels rose after the last ice age.

The age of the settlement meant that there are buildings of varying ages in the CBD. 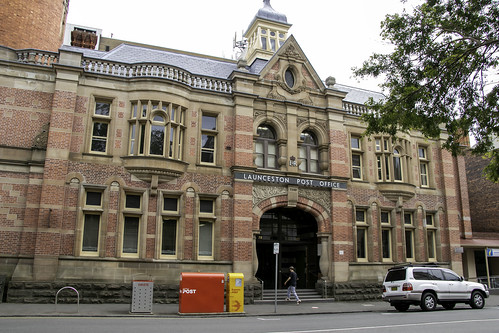 While this building is in the 19th century classical style. 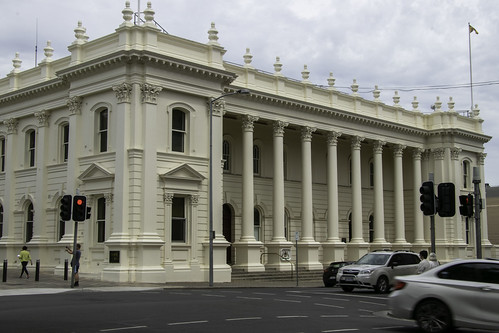 There are some terraces. 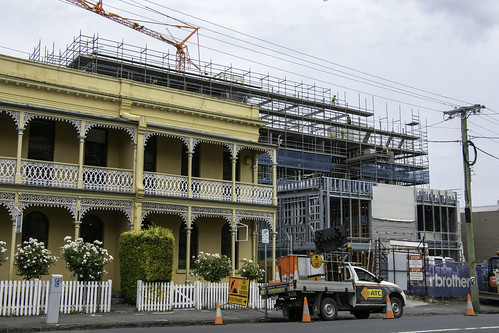 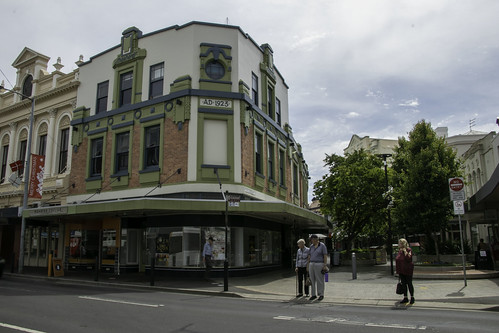 But my favourite was relic from the past. 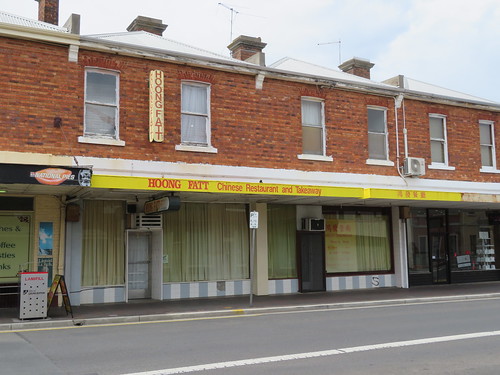